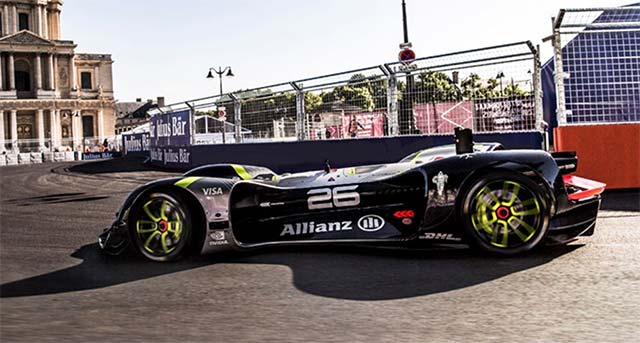 Robocar, the world’s first fully autonomous racing car, made its public track debut, as it ran in front of the packed grandstands assembled for the Qatar Airways Paris ePrix.

The Robocar, which forms the basis of the Roborace autonomous racing series, completed a number of laps of the Les Invalides circuit.

Roborace chief technology officer Bryn Balcombe said: “We’ve done loads of testing in the background so it’s kind of strange, people come up and say ‘you’ve changed the world today’ and we feel like we did that a few weeks ago! It’s a big event and to show it in public is really important to us.”

So far Roborace’s public outings have been with its test car, Devbot, which has run at a number of Formula E races this year. But behind the scenes, Robocar has been racking up the test miles.

“We’ve been in three weeks of testing at a private proving ground, that’s why we weren’t in Monaco because we were developing software,” Balcombe adds. “We’ve had a racetrack built for us that’s effectively a Formula E track because we need to get the sensory perception correct and be training in the right environment.”

During its initial run, Robocar stopped on track, but Balcombe said this was a routine part of the test programme.

“We were checking the accuracy of the line round Turn 8 – it got within a couple of millimetres of the barrier and that’s a bit too tight for the safety margin! We’re changing that line at the moment just to make sure it doesn’t get as close.”