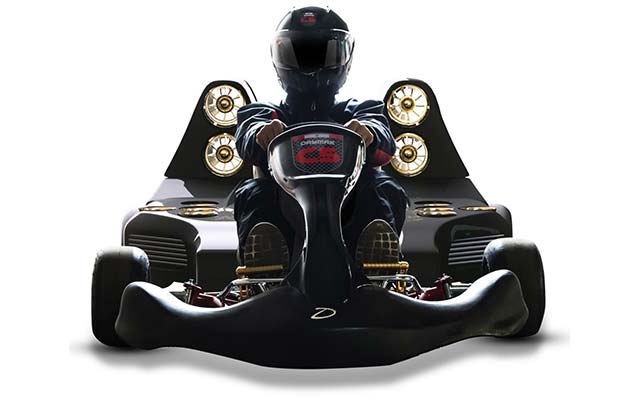 Toronto-based Daymak Inc. has launched its new product called Daymak C5 Blast Go-Kart, what the company believe will be the fastest electric go kart in the world.

Aldo Baiocchi, President of Daymak states, “We have developed the fastest 100% clean energy go kart in the world by far. We plan to achieve 0 to 60 in less than 1.5 seconds!!! It will be a little faster than the Tesla P100D. According to the Guiness Book of World Records, the current record is being held by Hochschule Osnabrück Institut MuT, which was clocked at 0 to 60 in 2.635 seconds.”

The Go Kart weighs approximately 200kg, but after turning it on using the EDF motors and Daymak technology to balance the weight, goes down to approximately 100kg, making it extremely light and fast.

The Daymak C5 Blast Go-Kart will be built in the new Daymak manufacturing facility located in Toronto, Canada. There will be two versions offered: Daymak C5 Blast regular with only 1 motor retailing for $9999 USD and Daymak C5 Blast EDF model for $59,995USD.

Preliminary testing has the unit hovering around the record already and only in its alpha stage! “We have a working prototype and we are currently looking to apply this technology to a variety of projects and are actively seeking strategic partners and investors to bring it to the next level. The potential are limitless,” states Jason Roy, Vice President. “We went through all this effort to break the record so we figured ‘Hey might as well smash it!’ And to have a Canadian company hold the record in engineering is pretty awesome! We just have to find someone fearless enough to drive it!” finishes Akili Sylvester, Lead Project Manager on the Daymak C5 Blast Go-Kart.

Baiocchi continued, “We could actually make it lighter and faster and at some point the Go Kart would start floating like the Star Wars land speeder or we could add wings and it would fly. Speed will not be an issue and we think we can even go eventually under 1 second 0 to 60 making it faster then any vehicle in existence.”

“This technology could be applied to any vehicle and give boosting power unheard of before. If you want to go faster call us!  We will make your car fly!” states Aldo Baiocchi. Daymak’s plan is to have Guinness Book of World Records to officially validate their current statement soon.

The Daymak C5 will be available to customers globally through its website.