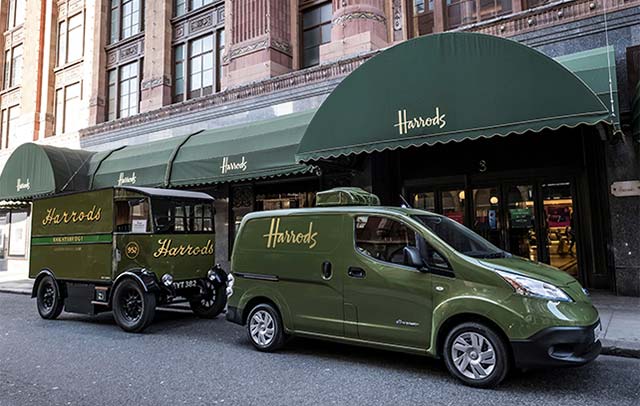 Over 100 years after the legendary London department store first added an electric van to its fleet, Harrods is once again returning to EV technology, with the addition of the 100-percent electric Nissan e-NV200 delivery van.

The British department store is the latest European business to add a zero emission Nissan e-NV200 to its fleet, with more than 27,000 Nissan electric vehicles sold to businesses across Europe so far.

Nissan officially handed over the 100-percent electric van to Harrods outside its luxury Knightsbridge store this week.

The Nissan e-NV200 has been specially adapted to perfectly fit Harrods’ delivery needs. The load space of the van has been fully refrigerated and shelving units added to allow for fresh groceries to be transported in optimum condition. The exterior has also been wrapped in the traditional green and gold Harrods livery to make it recognizable as it travels around the city.

The e-NV200 has a range of up to 106 miles (170 km) on a single charge, which means it is easily capable of making up to 50 deliveries per week covering an average distance of 150 miles (241 km) in the London area with Harrods only needing to charge it once a week.

With an average running cost of as little as 2 pence per mile (€0.03 per km), the e-NV200 offers an alternative practical solution which will have a positive effect on city-center air quality.

In 1919, the store used solid-tired American Walker electric vans, later building its own fleet of 60 electric vehicles to deliver goods to local London customers. As petrol engines became more popular, the electric vans were slowly phased out. However with the introduction and development of new infrastructure and technology, Nissan has enabled Harrods to have an all-electric van on its fleet once again.

“It’s wonderful to see an electric Harrods van on the roads of London again,” said Guy Cheston, media sales director at Harrods. “As one of Britain’s largest established department stores, we are committed to reducing our carbon emissions and mitigating our environmental footprint. As part of our carbon and energy management policy, we have identified transportation as a key area where we can make a real impact. We have a strong heritage in developing innovative technology, both in-store and out, and Harrods was one of the first companies in the UK to develop an all-electric commercial fleet, introducing our first electric vehicle over 100 years ago. Electric technology has developed rapidly since our old fleet was in operation, and is now a far more sustainable transport solution. Nissan is the leader in EV technology and the e-NV200 was the obvious choice for us, allowing us to easily complete daily deliveries more sustainably and efficiently.”

Harrods joins more than 900 companies worldwide who have trusted Nissan to help them towards a more sustainable future. Named Europe’s best-selling electric van in 2016, the e-NV200 is part of Nissan’s popular zero emission range, combining the best elements of two multi-award winning vehicles: the Nissan LEAF and Nissan NV200.