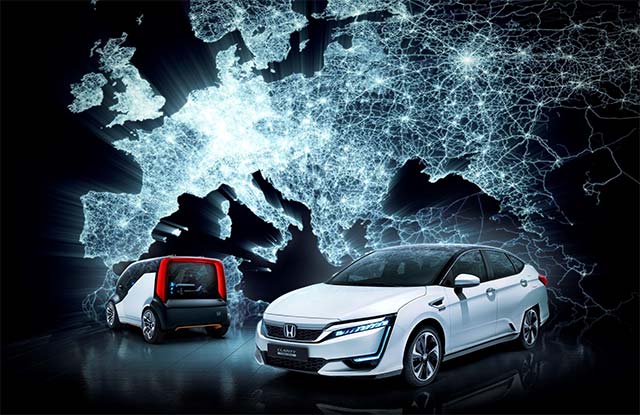 Honda Motor Europe’s President and COO, Katsushi Inoue, has revealed key details of the brand’s new ‘Electric Vision’. Speaking at the 2017 Geneva Motor Show, Inoue-san outlined Honda’s commitment to an electric future in Europe, with a specific aim to have electrified powertrains in two thirds of European cars sold by 2025.

The announcement confirms that Europe is at the forefront of Honda’s global electric vehicle strategy.

Announcing the strategy in Geneva today, Inoue-san said: “We will leverage Honda’s global R&D resources to accelerate the introduction of a full portfolio of advanced, electrified powertrains for the European customer.”

Honda’s focus on electrification in Europe will initially be driven by a roll-out of hybrid technology across its automobile range. The first new hybrid model, which will feature Honda’s two-motor hybrid system, will go on sale in 2018.

Honda’s Clarity Fuel Cell model will be showcased at Geneva, following the arrival of the first cars in Europe at the end of last year. The Clarity Fuel Cell is the world’s most advanced fuel cell vehicle and delivers a class-leading maximum range of 700 km (434 miles).

The arrival of Clarity Fuel Cell in Europe as part of the Europe-wide HyFIVE (Hydrogen For Innovative Vehicles) initiative reinforces Honda’s commitment to drive the adoption of fuel cell vehicles and the creation of a viable hydrogen refuelling infrastructure across the region.

The announcement of the electric vehicle strategy for Europe comes just weeks after Honda was confirmed as the fastest growing mainstream car brand in the region in 2016.

The full-year data from European industry body ACEA shows that total sales for Honda in EU and EFTA countries in 2016 were 159,126 units to the end of December, an increase of 20.8% per cent compared to same period in 2015. Honda’s growth significantly outpaced the results for the EU passenger car market as a whole, which saw a year-on-year increase of 6.8% per cent.