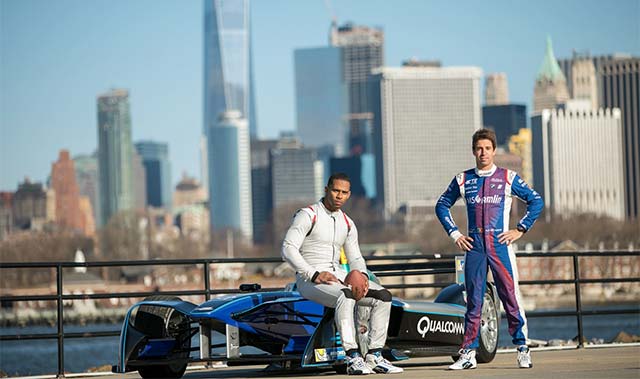 The Brooklyn Cruise Terminal will host the first FIA-sanctioned open-wheel race to take place within the five boroughs of New York City. This historic event will take place over two days on July 15 and 16. Cruz was joined by Andretti driver Antonio Felix da Costa as he got to grips with the location of the Brooklyn Circuit on the shores of New York Harbour.

Tickets are now on pre-sale for the Pier 11 main grandstand, priced at $75 (excluding booking fees).

For a limited period, main grandstand tickets for each race will be priced at $75, with a discounted price for students – $47.50. Tickets for children aged between 5-15 are available at half price – $37.50 (all prices excluding booking fees).

This special offer will remain valid until midnight on Tuesday, February 28 – subject to availability. From March 1, full price tickets in the Pier 11 main grandstand will be priced from $85 (excluding booking fees).

“I’m excited to be here, excited to be a part of something special,” said Victor Cruz. “To bring a motorsport event to the heart of a city, especially a place like New York, is huge. I feel like sports are at the epicentre of this city – and we’re definitely excited about seeing Formula E this summer.”

Antonio Felix da Costa, Andretti Formula E driver, said: “We’ve had good experiences so far in Formula E with how we approach new cities, and I think New York is going to raise the bar on any other city. It’s one of the greatest cities in the world. To have a race – especially with Formula E – where we’re developing electric vehicle technology, will create awareness for all the people that have had question marks about this. I can’t wait to race here for real in July.”

Jan 27, 2017Blagojce Krivevski
California Utilities Want $1B for Electric Car ProjectsThe Shipment Volume of Advanced Batteries Through 3Q 2016 Equates to More Than 323M Battery Cells and Nearly $4B in Sales