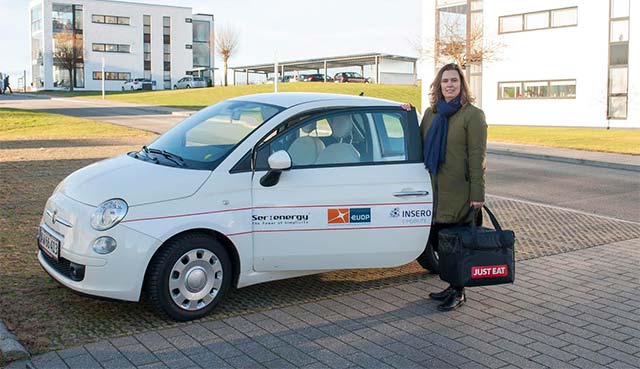 A new vehicle technology which meets the challenges of today and provides the answer for tomorrow’s sustainable transport has over the past seven weeks been tested by Just Eat. Now, Just Eat can look forward to delivering food in the world’s first registered methanol-driven fuel cell car.

An electric vehicle that runs 800 km without recharging. This is now a reality with a new range-extender, developed by the Danish project ’Modular Energy Carrier Concept’ (MECc). The range-extender applies a groundbreaking fuel cell technology, which is based on bio-methanol as energy source and makes it possible to extend the range of electric cars from 100 km to 800 km – four times longer than the average electric car today.

The model variant which Just Eat has tested over the past seven weeks is Fiat 500 configured with a battery pack and the range-extender. The past year, the project has run successful internal tests. Now, the car is cruising the roads in Denmark as the world’s first registered methanol-driven car and has passed its test in a living lab setup at Just Eat.

“In Just Eat, we are always looking to create a greener profile. Therefore, we often test alternative solutions in regards to the composition of our delivery fleet. Unfortunately, most of these solutions fall short due to reduced driving range. So when we see a solution such as this, where range is not an issue, and where we can make use of existing infrastructure then it becomes really interesting for us,” says Philip Hinrichsen, Operations Director Just Eat Denmark.

The test has been so successful that Just Eat has decided to continue delivering food in the methanol-driven fuel cell car – now in normal operation and no longer as a test. This marks an important milestone for the technology and not least for sustainable transport in general as it means that methanol-driven fuel cell cars can now cruise the roads of Denmark on commercial terms.

The future alternative for electric cars
The fuel cell technology, which is applied in the project, can be implemented and adjusted to most electric cars and can thereby contribute to eliminating any type of range anxiety at the same time as creating a cost effective alternative to existing electric cars.

Besides greatly extending the range of the vehicle, the technology provides a number of advantages which benefits the consumers as well as the environment. The range-extender is clean, simple and applies methanol as an energy carrier. This means that cars, configured with the range-extender, runs on bio-methanol, which is cheaper than gasoline and diesel, takes less than three minutes to refuel and can be produced from renewables in large entities.

The fuel cells convert methanol into electricity which charges directly onto the battery of the car – quick, efficient and with no particle emission. Moreover, the fuel cell provides heating of high quality which is used for cabin comfort heating and in the long term, can provide cooling via thermic-driven air-condition.

”The technology developed in the MECc project contributes to making sustainable transport even more accessible and widespread by meeting those demands and needs users have today in regards to modern transportation. Especially, we see a great potential in the segment of professional users who have an extensive driving need and at the same time wants a green profile,” says Jens Christian Morell Lodberg Høj, project manager for the MECc project, and continues: “Furthermore, as the technology matures and more modules enters in to the market, the technology will become even more competitive in price and weight, which will open up to even more markets in the future.”

Also, rolling out methanol gas stations in a large scale is both easy and cheap. Similar to gasoline and diesel, methanol is a liquid fuel, which makes it possible to use the existing infrastructure of gas stations worldwide. The refueling technology will thus be integrated directly into standard refueling stations making it attractive to automakers worldwide.

A shared vision
This investment is aligned with Methanex’s vision to grow the use of renewable methanol and increase the availability of low carbon methanol from sustainable sources. Methanex is a partner in the MECc project and a key shareholder of Carbon Recycling International (CRI). CRI built and operates the world’s first industrial scale facility for production of renewable methanol from recycled CO2 emissions and is currently planning several new facilities globally.

“We are very excited to supply our renewable methanol for the MECc project and help to demonstrate how the technical limitations of electric cars can be overcome with liquid fuel range-extenders, while providing carbon neutral mobility,” says Benedikt Stefansson, Director of Business Development for Carbon Recycling International (CRI).