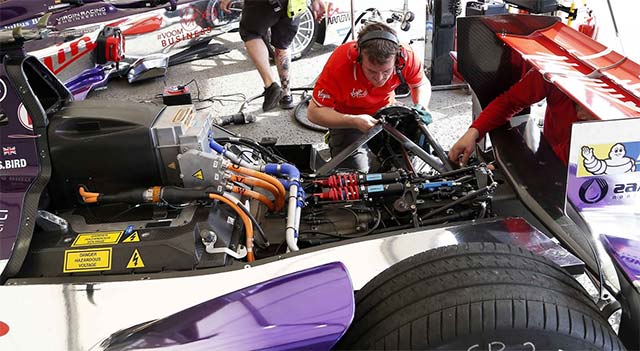 One of the principle aims of Formula E is to promote the use of electric cars. Formula E believes that increased electric car usage will make significant benefits to the quality of air in our cities, which in turn will lead to an improved quality of life.

But one of the main objections from the anti-electric car lobby is that the pollution caused by the production of the electricity in the first place negates their environmental credentials.

This argument carries some weight in countries where the main supply to the national grid comes from coal-fired power stations (although it still overlooks the fact that the amount of carbon produced in the process of creating and distributing petrol or diesel is greater still). Nevertheless, if electric cars are to make a significant difference to the quality of the air we breathe, charging them with electricity produced by low-emission sources is crucial.

As Formula E wants to play a key role in advancing the technology surrounding electric car ownership, not just the cars themselves, the bold decision was taken that the charging of the racing cars had to come from a sustainable source.

To this end, a British company called Aquafuel Research Ltd was commissioned to build a pair of mobile generators that could be packed inside a shipping container and freighted to each race. But what makes these generators special is that they run on a fuel that is virtually emission free – glycerine.

“What we do is provide an electric power and distribution system in a very controlled way so that the cars can be charged in an hour in a very safe and reliable way that is fair to all the teams,” says Paul Day, the CEO of Aquafuel. “The really beautiful thing about it is that we do that with our own patented renewable energy generators using a really clean fuel – clean in terms of carbon emissions and clean in terms of the local air quality, very low in NOx emissions, very low in particulate emissions – there’s no smoke.”

The generators are based on standard production diesel engines – a Cummins KTA50 to be precise – that have been adapted with Aquafuel’s patented technology to run on glycerine. The fuel itself is a by-product of the manufacturing of bio-diesel. Traditionally its commercial uses have been mainly in cosmetics and pharmaceuticals, but six or seven years ago, with the new bio-diesel supply outstripping traditional demands, Day started to look at other applications for the sweet-tasting, colourless and gloopy liquid.

“If sustainability means anything, I think it means using any material to the best affect that you possibly can – if you want to want to eat pork sustainably, you’d better eat the whole pig – that’s really what we’re looking at,” he says. “So we started a research project with Greenergy into how you could use glycerine as an engine fuel. We had to do quite a lot of research work before we came up with the combustion cycle that meant you could burn glycerine in a diesel engine.

“It is quite surprising how everything seems to be positive: its lubricity is much better than diesel, so all of the moving parts in the injection system are lubricated much better and they stay clean. Because you don’t produce any soot and particulates the oil stays clean and because the exhaust is so clean the catalysts for cleaning the emissions stay in really good condition and stay in their best operating zone the whole time as they never get clogged up. On top of all that, astonishingly, it’s more efficient than diesel is in the same engine.”

In order to keep the Formula E cars charged, the Aquafuel generators on site provide 42kW of electricity per car. That equates to about 850kW of power if 20 cars are plugged in at once. This amount of energy is roughly what would be used by 2000 UK homes over the same time according to UK energy regulator Offcom. The reduction in pollution is impressive; in just that hour nearly half a tonne of carbon emissions and half a kilogramme of poisonous NOx emissions are avoided (using UK figures as a baseline).

Having developed the technology to make glycerine work as a fuel, the next stage for Aquafuel was to find a commercial application for it. Given the similarities in their ethos, a partnership with Formula E made sense and as the relationship develops, there are plans to use the tie-in to showcase a range of possibilities from integrating ‘green’ fuel into a regional grid, to demonstrate the effectiveness of the low-emission technology.

Of course, there will be critics who state that the conventional fuel burned in the transportation of the generators undermines its credentials. But firstly, the Formula E calendar has been designed in conjunction with founding partner DHL to minimise the amount of air travel and to promote sea and road freight where possible. Also, as Day argues, if you are to spread the word about what the technology can achieve, you need to get it in front of people.

“I think that in the same way that you have to invest some money financially you have to invest some carbon in actually showing people and demonstrating that this stuff works,” he says. “We want to promote glycerine generators, we want this kind of technology to find its way to the rest of the world and find a way to reduce emissions. The same way that Formula E wants to show that these cars are amazing and that they have a great future and by doing that they can bridge the gap between where we are now and the electric car of the future.”

One other issue that has to be taken into account is the way in which the crops for some bio-fuels are grown. In some cases, precious eco-systems have been lost to plantations, valuable arable land has been taken over putting pressure on indigenous human food and water supplies. But within the next three to five years, the production of glycerine from salt water alga could be commercially viable. This would create a fully sustainable production process.

“There are naturally occurring alga – Dunaliella salina – which grows in very salty conditions, for instance in solar salt production,” says Day. “There’s a group based at the University of Greenwich that are working on commercialising a whole bio-refinery based on this alga. It has a really holistic use. The beauty of it is that its cultivation is in saline places – not places where you are substituting fresh water supply, it’s not displacing crops and in fact the by-products are things that can be integrated into other agricultural eco-systems. We have high hopes for algae in future.”

As the sales of electric cars grow – substantial increases have been recorded in the US and UK in the latest figures – so will the need to charge them. If the glycerine-powered generators Aquafuel is producing become common place in areas where micro grids are required – supermarkets and universities for example – then Formula E’s dream of creating truly sustainable mobility moves ever-closer to a reality.