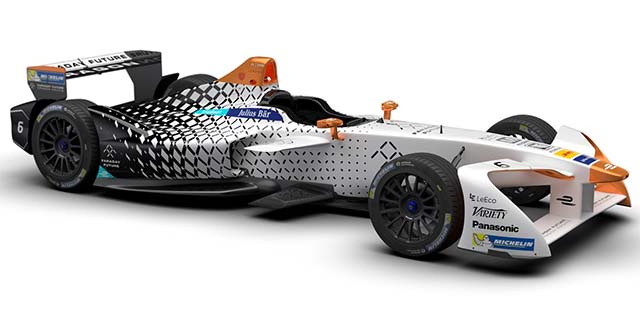 The juxtaposed black field embodies the assertive, powerful, and refined performance that competitive drivers will experience behind the wheel. This compliment between black and white also signifies the commitment of Faraday Future Dragon Racing and Formula E to pursue a clean energy, elevated performance, and sustainable, forward-thinking future.

The design draws inspiration from opposing polar forces that drive the movement of an electromagnetic wave – a scientific discovery that underpinned the invention of the electric motor. Similar to nature’s constant battle for balance between positive and negative forces, the design symbolizes the profoundly intertwined relationship between opposing energies. This race vehicle is a demonstration of the powerful potential that is unlocked in the pursuit of environmentally responsible, viscerally responsive electric mobility.

The clean lines that make up the Faraday Future logo envelope the cockpit, and are compressed and stretched along the side of the vehicle to demonstrate the pull of forces at play as the car races across the track. As these lines warp across its surface, they form a rich latticework that reflects the dispersal of force in an electromagnetic wave. The selective flares of metallic orange are the livery’s primary visual accent. Located on the mirrors, air intake, and the underside of the front and rear wings, this highlight invokes a spark of crackling electricity across the car’s fundamental aerodynamic features.

In season four, FF will expand its relationship as a technical partner to begin supplying hardware to the team. In season five and beyond, Faraday Future Dragon Racing will implement various Faraday powertrain components, software, firmware and other hardware as the team sees fit. This could include Faraday Future motors, gearbox, and the FF Echelon Inverter.

“Unveiling our first livery is an incredible opportunity to showcase the energy that our team brings to Formula E,” said Marco Mattiacci, Global Chief Brand & Commercial Officer, Faraday Future. “As we look forward to the future, Formula E will prove to be an invaluable practice that will bolster Faraday Future Dragon Racing’s capabilities both on and off the race track.”

“With Faraday Future as our partner, this further positions Dragon Racing as a leader in Formula E,” said Jay Penske, Team Owner and Team Principal of Dragon Racing. “This livery is a representation of our joint vision and desire to innovate at every step of this alliance.” Faraday Future Dragon Racing announced its official partnership at the London ePrix in July, 2016. During the upcoming 2016/17 season, FF will operate as a core technical partner and the team’s title sponsor, working together to develop key technology software solutions to maximize performance capabilities within the powertrain.

“The strategic partnership with Faraday Future is a critical part of LeEco’s SEE plan,” said Ding Lei, Co-Founder, Vice Chairman and Managing Director of SEE Plan, LeEco. “LeEco gives its full support towards Faraday Future Dragon Racing, and believes in the future of Formula E, as it aligns LeEco’s vision for future eco-transportation. We look forward to working closely with Formula E in this new and exciting motorsport.”