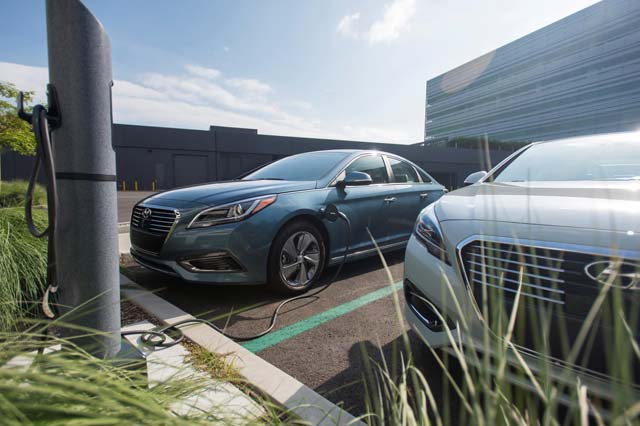 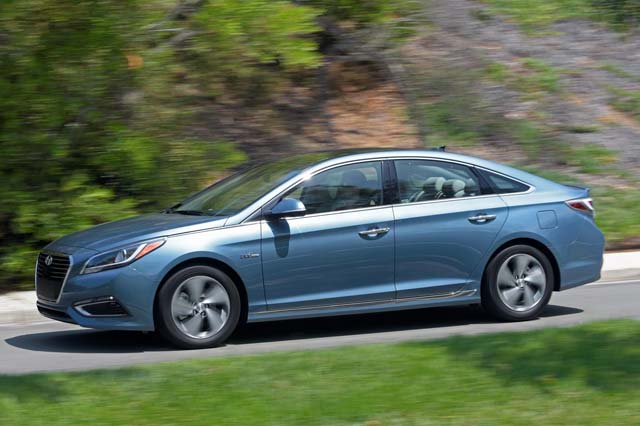 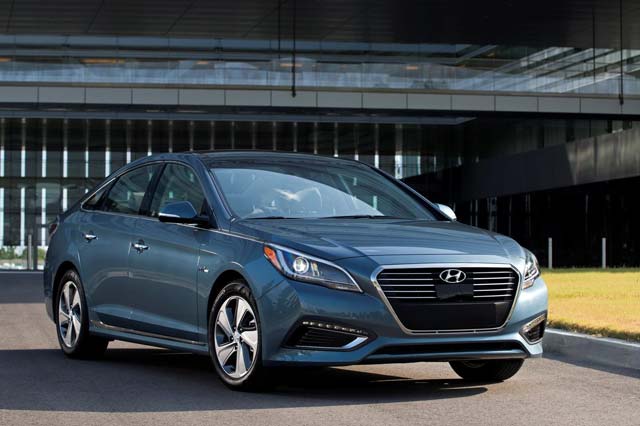 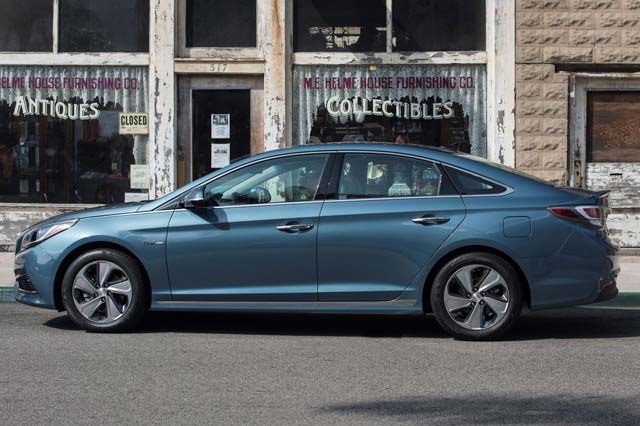 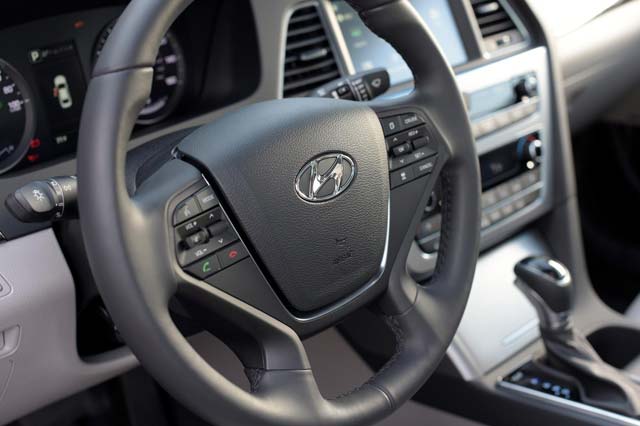 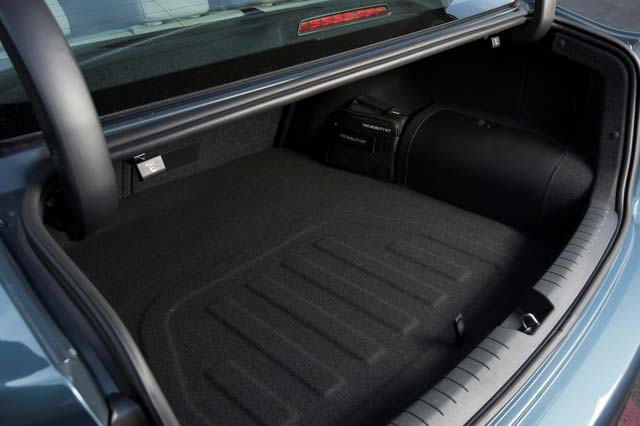 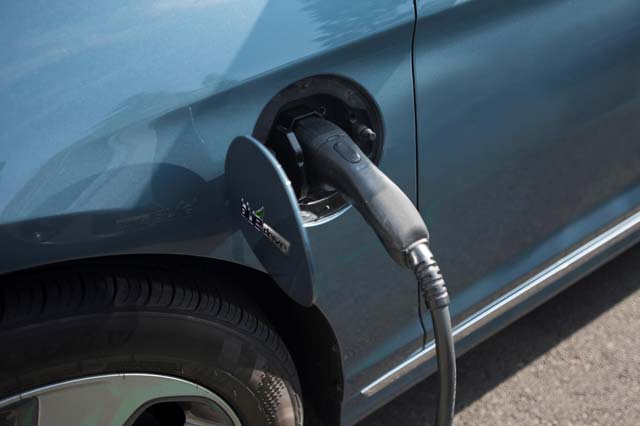 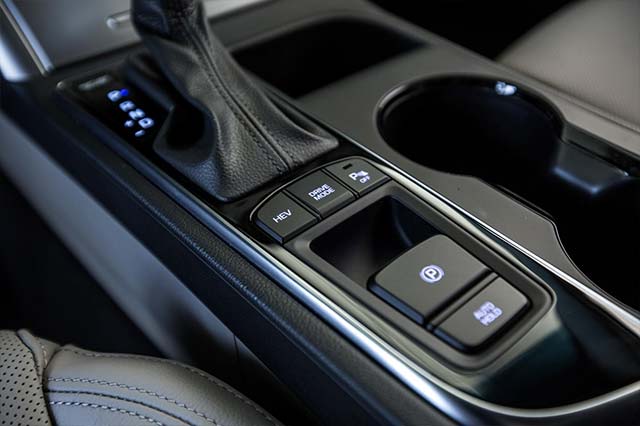 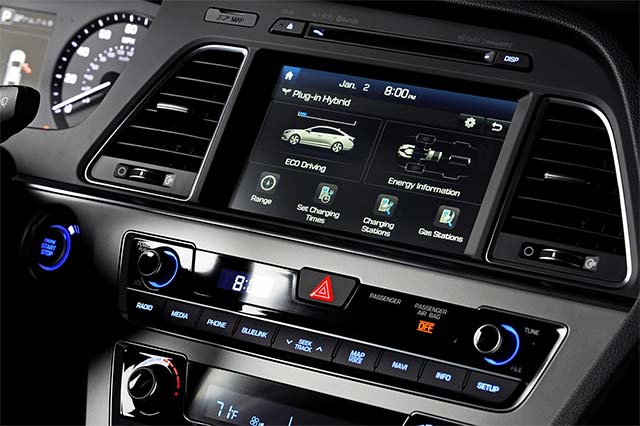 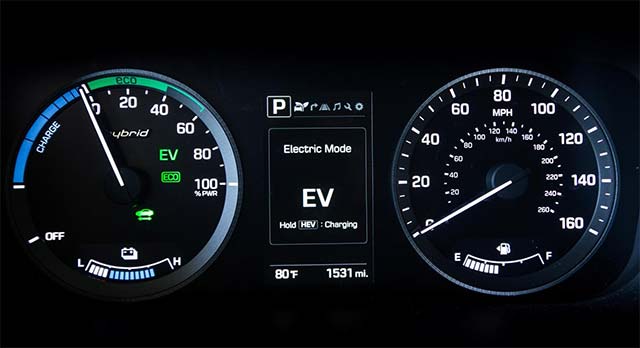 The 2017 Hyundai Sonata Plug-in Hybrid will offer an 27 miles of all-electric range and can recharge in less than three hours with a Level-Two charger.

It offers the best of both worlds by providing the power delivery of a hybrid gasoline engine, perfect for long trips, with the additional benefit of environmentally friendly all-electric range for commuting. As a result, many consumers will be able to complete their daily commute without using a single drop of fuel, and total estimated range is an impressive 590 miles.

The 2017 Sonata Plug-in Hybrid receives a new exterior color palette early in the 2017 calendar year. It is built at the Asan, South Korea plant and is available now at Hyundai dealers.

PLUG-IN POWERTRAIN
A 9.8 kWh lithium-ion polymer battery pack, more than five times larger than the Sonata Hybrid’s battery, gives the Sonata Plug-in Hybrid an estimated all-electric range of up to 27 miles, further than any other midsize PHEV sedan.

The Sonata Plug-in Hybrid uses a six-speed automatic transmission with Hyundai’s Transmission-Mounted Electrical Device (TMED), a 50 kW electric motor, in place of a torque converter. The 50 kW electric motor is 32 percent more powerful than the motor used the in Sonata Hybrid and allows EV operation at higher engine load and speed. A 2.0-liter Nu four-cylinder GDI engine coupled with the electric motor allows the Sonata Plug-in Hybrid to operate just like the Sonata Hybrid once the onboard battery charge is depleted. Sonata PHEV’s Nu engine produces 154 horsepower and 140 lb. ft. of torque and the total system output is 202 horsepower at 6,000 rpm.

AERODYNAMIC EXTERIOR
Sonata Plug-in Hybrid uses the same functional design cues as the Sonata Hybrid to improve its drag coefficient to an industry-leading 0.24 as well as provide visual cues to distinguish the hybrid models from other Sonatas. A distinctive instrument cluster provides Sonata Plug-in Hybrid drivers with additional information about the Plug-in Hybrid’s functions. A charge indicator is located on top of the dashboard to make it easy to see the state of charge from outside the vehicle.

BLUE LINK APP
Owners can manage and monitor the Sonata Plug-In Hybrid remotely via the Blue Link smartphone app. With the app, owners can access real-time data from their Sonata PHEV and perform specific commands like starting the engine and locking doors. Plus, users can search for points of interest using Google with voice or text and have the directions when they start their Sonata Plug-in Hybrid.

The most useful feature of the app is managing the car’s charging schedule. Owners are given vehicle charging options that they can select while in the car, but users can also manage them remotely via smartphone. Immediate charge is the simplest option, as charging begins as soon as the Sonata Plug-in Hybrid is plugged in.

Individuals that have different electric rates at various times may want to schedule the charge. Users can do that with the new app based on time and date. For example, charging could be set to start at 10 p.m. on Wednesdays and Thursdays on a weekly basis.

Hyundai offers many active safety technologies for the Sonata Plug-in Hybrid to assist drivers and help prevent accidents. No longer reserved for luxury cars, advanced safety technologies such as Forward Collision Warning and Lane Departure Warning are also available in this midsize sedan.

Rear Cross-traffic Alert (RCTA) is another feature derived from the Sonata Plug-in Hybrid’s advanced Blind Spot Detection system. RCTA scans the areas to each side of the vehicle when drivers are backing out of parking spaces. If the system detects another vehicle is approaching from the side, the Sonata driver is given an audible alert. This system is another tool that helps Sonata drivers utilize the active safety technology.

An available Lane Departure Warning System uses a forward-facing camera to recognize lane markers. If the system detects the vehicle is headed outside the lane markers, a warning light on the dashboard illuminates and an audible sound alerts the driver.

Hyundai’s eight-inch navigation system offers a map and music split-screen display and the ability to record SiriusXM presets 1-6. Switching to a preset station in the middle of your favorite song won’t be an annoyance any longer. Rewind up to 22 minutes to listen to the full song or catch up on a sports broadcast. SiriusXM Travel Link® provides access to traffic information, sports scores, weather, stock prices, fuel prices and local movie times. All Sonata Plug-in Hybrids will also support “Eyes Free” Siri integration, which allows drivers to perform a variety of functions without taking their eyes off the road.