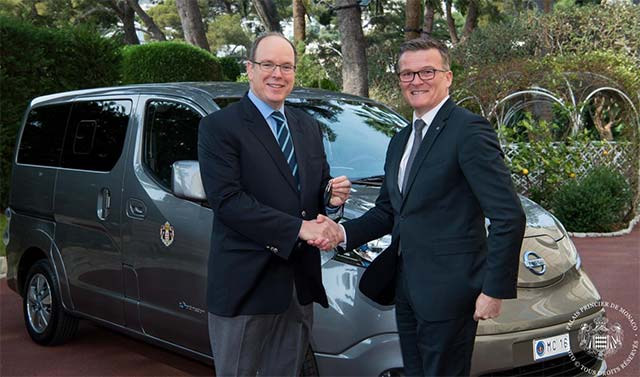 The Prince’s Palace of Monaco has taken delivery of two all-electric, zero emission Nissan e-NV200 electric vans, marking an important step in the Palace’s commitment to reducing its environmental impact.

Received by the Sovereign Prince of Monaco, H.S.H. Prince Albert II at a handover ceremony held at the Palace, the two e-NV200 five-seater Evalia vans will be used primarily as on-site delivery vehicles, transporting a variety of goods as well as people across the historic estate, which is home to the Prince and his family.

Offering true zero-emission mobility, the e-NV200s will contribute to the Palace’s strategy to reduce the estate’s greenhouse gas emissions as part of a wider sustainability action plan implemented in Monaco by the Prince.

Commenting on the country’s sustainability strategy and the addition of the e-NV200 electric vans to the Palace’s vehicle fleet, Prince Albert said: “Reducing our greenhouse gas emissions is vital and our country has set ambitious targets. Our aim is to achieve a 50 percent decrease in carbon emissions by 2030, with the ultimate goal of being carbon neutral by 2050.”

Combining the best elements of two multi-award winning vehicles – Nissan LEAF and Nissan NV200 – the all-electric e-NV200 is a practical, versatile and sustainable commercial vehicle. Boasting a range of up to 105 miles on a single charge, the Nissan e-NV200 has class-leading load space capable of carrying people or goods while producing neither exhaust emissions nor noise pollution.

Nissan was the first manufacturer to bring zero emission mobility to the mass-market with the introduction of the 100 percent electric Nissan LEAF in 2010. The Nissan LEAF is the world’s best-selling electric vehicle and together with the Nissan e-NV200, there are more than 220,000 Nissan electric vehicles on the roads, globally.

The Principality of Monaco has already adopted a series of measures as part of a wider sustainability strategy focusing on road transportation, waste and energy management. Sustainable mobility is advocated across the state through the use of public transportation and the adoption of low emission vehicles.  In 2012, Monaco reduced its emissions by 13.2 percent, and achieved its objective to reduce average emissions by eight percent during 2008-2012.