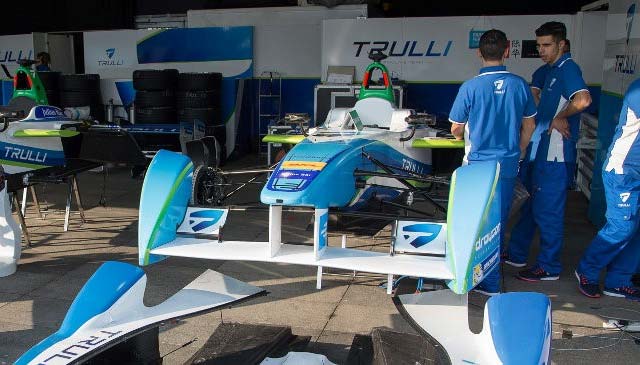 The Trulli Formula E Team has announced that it will leave the FIA Formula E Championship with immediate effect.

Trulli joined Formula E ahead of the inaugural season after it took over the entry from Drayson Racing. For the second season the team were one of eight approved manufacturers, but both technical and supply issues with its Motomatica JT-01 forced Trulli to miss the Beijing and Putrajaya ePrix.

These issues have now led the team to relinquish its entry to the series back to the organisers, meaning that 18 cars will be entered for the Punta del Este ePrix on December 19.

Francesco Test, CEO of Trulli GP, said: “After failing scrutineering in the Beijing and Putrayaja ePrix and in light of our commercial agreement with Formula E Holdings, we are forced to announce the retirement of Trulli Formula E from the FIA Formula E Championship. As major supporters of this all electric series, we are please to leave space for a new OEM to enter the series and further help develop the series and electric racing technology.”

Alejandro Agag, CEO of Formula E, said: “We are disappointed that Trulli has decided to leave the championship. Having a driver of the status of Jarno Trulli involved in the early days certainly helped to boost the credibility of Formula E. Taking the decision to become a full manufacturer was a bold one, and one that was always going to present challenges due to the technical advances that Formula E is pioneering. While we are very sad to see Trulli leave, this does create an opportunity for a new team and manufacturer to enter and we are very confident about the future strength of the series.”

Dec 17, 2015Blagojce Krivevski
Rinspeed Etos Is a Self-driving BMW i8 with Its Own Drone [video]Nevs Inks $12B Deal With Chinese Panda New Energy