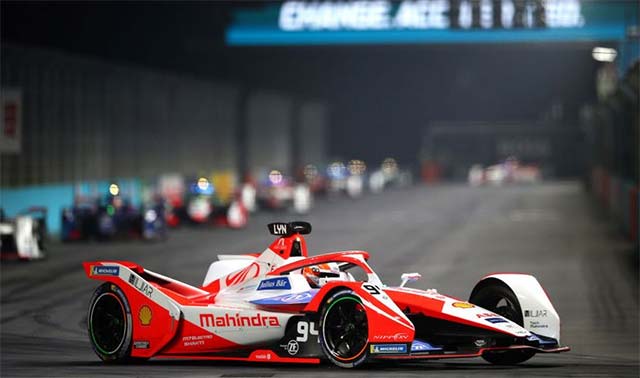 Lynn was followed home by Mercedes-EQ Formula E’s Nyck de Vries, who went top of the Drivers’ Championship with his second second-place in two days, and Jaguar Racing’s Mitch Evans in third.

The Brit navigated a frenetic encounter that had it all, and the decisive moment of the race took place with the pack released from a spell under the Safety Car on Lap 13. Down at the double hairpin, Oliver Rowland (Nissan e.dams) made a move for the lead with a surprise lunge on Stoffel Vandoorne (Mercedes-EQ) – who had led away from Julius Baer Pole Position.

A bump in the braking zone left the Nissan driver a passenger as he speared into the side of the Belgian’s Mercedes. The pair were left all tangled up, allowing de Vries to pick up the pieces and pinch second – and then first when Lucas di Grassi (Audi Sport ABT Schaeffler) leapt for ATTACK MODE.

Heading into the final quarter hour, di Grassi had made the most of that 35kW boost to slice by de Vries into Turn 1. On the next tour, Lynn followed with what would ultimately be the race-winning move – the Mahindra driver also in ATTACK MODE. De Vries’ early dart for his second activation had not paid dividends, and he’d have to settle for second spot, while Evans picked his way through from fifth on the grid to an eventual third at the chequered flag.

Di Grassi had led on track for more than half of the race, and crossed the line first. The Brazilian was ultimately shown the black flag for failing to serve a drive-through penalty – deemed to have illegally taken the race lead by audaciously driving through the pit-lane, and crucially failing to come to a stop in his pit-box, under Safety Car conditions on Lap 12.

That result leaves de Vries atop the Drivers’ World Championship heading into the final race weekend of Season 7 in Berlin in three weeks’ time, while Robin Frijns’ points haul with fourth – up from eighth on the grid – proved vital and sees him second in the table, just six points shy of the Dutchman. Sam Bird (Jaguar Racing) holds third in the standings.

Envision Virgin Racing lead the Teams’ standings as the 2020/21 ABB FIA Formula E World Championship heads to Berlin for the final races of the season on August 14 & 15.