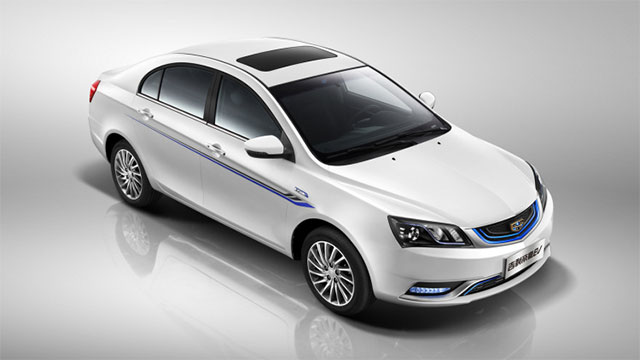 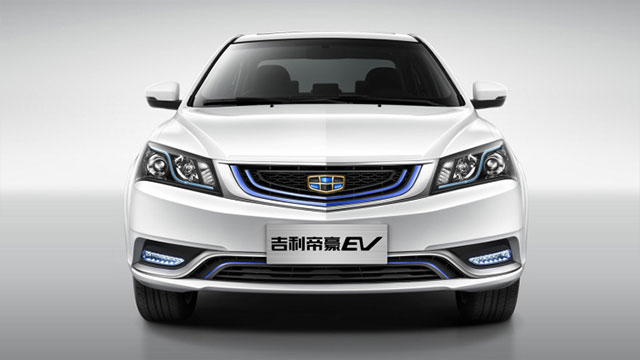 To highlight the Emgrand EV’s pure electric drivetrain the Emgrand EV has received a design update which includes a revised grill that has blue overtones running through it, the front wings of the vehicle have also gained an EV badge whilst on the interior the same blue overtones run through the dashboard and on the leather seat upholstery.

Power for the EV comes from a 44.8kwh battery pack that allows the Emgrand EV to travel 330km at 60km/h or in a combined driving environment reach 253km. The 95kw motor will produce 250Nm of torque and will reach 0-50km/h in just 4.3 seconds.

When driving the Emgrand EV users are given three driving options; ECO, ECO+ and Sports mode. The first two options allow for lean and ultra-lean operation whilst sports mode will provide greater reaction to the accelerator pedal, when in ECO modes the Emgrand EV’s dashboard will remain in a blue color, but once the driver moves to sports mode the dashboard will change to a sports orange color. The dashboard also displays remaining range, battery capacity and real time energy use. 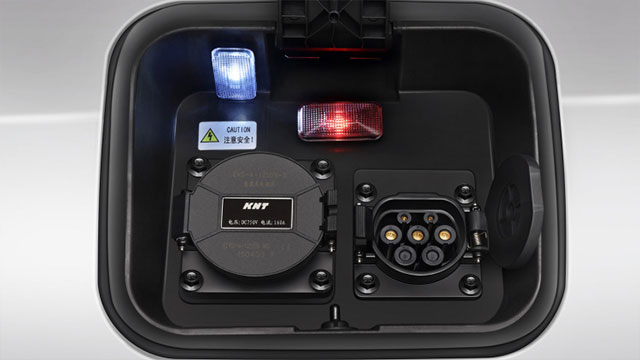 The Emgrand EV is equipped with two charging ports; slow charge and fast charge. Home users can use a regular socket to charge their vehicle with a full charge from zero to full capacity requiring 14 hours, users whom install the fast charger or have access to a public fast charger will reach a full charge within 48 minutes from zero capacity.

The Emgrand EV is equipped with Geely’s G-Netlnk intelligent automotive system which allows users to project their mobile phone screen directly onto the cars onboard entertainment system to easily use existing mobile phone navigation applications. Geely Auto’s engineers have also spent a great deal of time in perfecting the noise levels in the Emgrand EV; without the drone of an engine in the background a new level of NVH work is required to keep the cabin free of road noise. 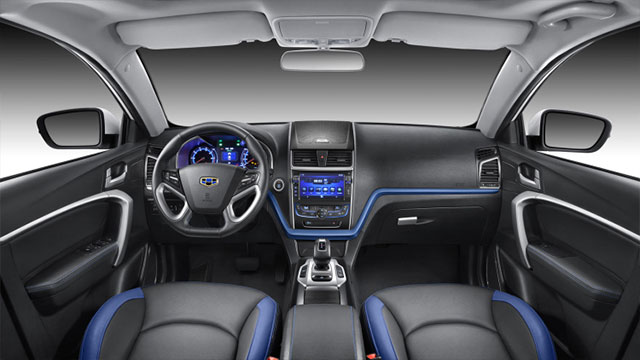 As part of the Blue Geely Initiative, Geely Auto is pushing to overhaul its entire product portfolio from 2016 to 2020 with the mass introduction of new energy vehicles which will include pure electric, hybrid electric and plug-in hybrid vehicles that will push Geely into being a market leader of automotive technologies in China.

Geely has established five key aims that are an essential part of the Blue Geely Initiative.

1.Geely will meet and exceed Chinese government fuel directives to bring average fuel consumption to 5L per 100km by 2020
2.Geely will move to sell plug-in hybrid vehicles at a similar price level to its traditional combustion engine range
3.90% of Geely Auto sales will consist of new energy vehicle sales by 2020
4.Geely will push forward with research into hydrogen fuel cells and metal fuel cells
5.Geely will become a market leader in new energy, light weight material technologies and intelligent and connected systems

Geely is committed to environmental concerns and improving the world in which it operates, hence Geely is committing to lowering its average fuel usage across the range to meet and exceed the Chinese governments mandated average fuel consumption of 5 liters per 100km (5L/100km).

By 2020 Geely aims for 90% of its vehicle sales to consist of new energy vehicle sales. Geely will achieve this by introducing three core technologies that will be made up of pure electric vehicles (EV), plug-in electric hybrids (PHEV) and hybrid electric vehicles (HEV), these three technology solutions will be based around two existing vehicle platforms and one vehicle architecture. Furthermore, Geely expects that by 2020 its new energy sales will be split into 65% PHEV and HEV and 35% EV.

Geely’s FE and PE platforms will be used to create mid-range and high end pure electric and hybrid electric vehicles, with the first vehicle being the Geely Emgrand EV which is capable of 330km on a single charge. The Emgrand EV is Geely Auto’s first pure electric vehicle and is based upon the best-selling Emgrand series, the Emgrand EV boasts a 0-50kph time of just 4.3 seconds and both rapid and slow charging facilities for use at home and public charging facilities, a full charge at a public fast charging station will take 48 minutes to reach full capacity.

By 2018 Geely aims to boost the range of its FE platform based electric vehicles to 400km which will use a maximum of 13kWh of electricity and then further boost range to 500km whilst using just 8kWh of electricity.