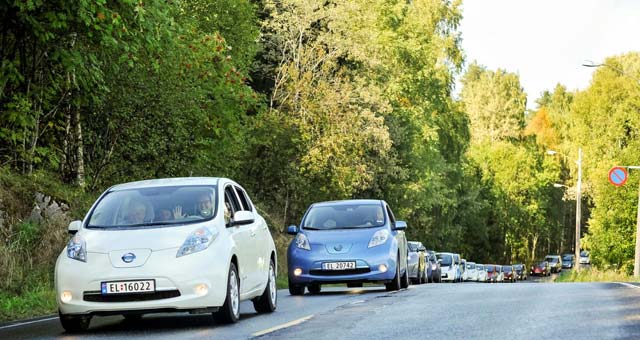 Broadening its efforts to fight climate change and grow its clean energy economy, California is joining with 10 European and North American governments as founding partners of an international alliance to accelerate global adoption of zero-emission vehicles (ZEVs).

Members of the International ZEV Alliance, which together account for more than a third of global electric vehicle sales, will cooperate to set ambitious targets to drive ZEV deployment, share data and best practice policies, and encourage other governments to join them. An agenda for expanding collaboration is outlined in a report released by the International Council on Clean Transportation (ICCT).

In addition to California, founding members of the alliance include The Netherlands, Norway and the United Kingdom in Europe; Connecticut, Maryland, Massachusetts, Oregon, Rhode Island and Vermont in the United States; and Québec. The alliance was launched last month, and the founding members were announced at a signing event at the Québec government office in New York.

“Limiting the impact of climate change is only possible if we transition to cleaner, more energy efficient vehicles,” said California Secretary for Environmental Protection Matthew Rodriquez. “We’re very pleased to be joining with many of the leaders in this growing market, and we look forward to working with them to put more drivers at the wheel of zero-emission vehicles.”

The ICCT report, “Transition to a Global Zero-Emission Vehicle Fleet: A Collaborative Agenda for Governments,” highlights how the world’s leading electric vehicle markets are being shaped by new and innovative public policies, including consumer incentives and infrastructure investments. The report also identifies a variety of ways that governments can improve collaboration to accelerate ZEV adoption.

“In these early years in the transition, there is much to learn from every region’s experience in the roll-out of zero emission vehicles. Developing the new zero-emission vehicle market will require global scale, in the tens of millions of vehicles, to achieve lower cost and long-term success,” the report says. “International collaboration will be a critical step toward greater market volume and a long-term market transformation.”

This month, ICCT estimates that the number of plug-in electric vehicles on the world’s roads reached one million – a major milestone in the emergence of this new industry. The milestone was achieved in about six years – several years faster than it took for non-plug-in hybrid electric vehicles to reach the first million in sales. But with global vehicles approaching two billion, electric vehicle growth will have to ramp up dramatically to achieve long-term climate goals.

Members of the International ZEV Alliance are leading the way in this transition. Although the 11 member countries, states and province account for only seven percent of global car sales, they represent 38 percent of the global market for electric vehicles – thanks in large part to innovative government policies and investments.

“These governments have been crucial to early adoption of electric vehicles,” said Nic Lutsey, Program Director and author of the ICCT report. The ICCT also serves as Secretariat to the International ZEV Alliance. “Each government has helped grow the early market with a mix of financial and non-financial incentives, vehicle policy, consumer awareness and outreach, and the installation of a charging infrastructure.”

“Norway has done a lot to spur the electric vehicle market domestically,” said Jens Frølich Holthe, Political Advisor to Norway’s Minister for Environment. “We see working together with other proactive governments as a key to a global transition to an electric fleet. The problem of climate change is clearly global, and we see electric vehicles as one of the important global climate solutions.”

All seven of the U.S. states joining the alliance are also members of a multi-state task force to support electric vehicles in the United States. Created in 2013, the task force is working to implement a joint action plan that includes encouraging fleets to acquire ZEVs, planning and investing in ZEV infrastructure, and tracking progress toward the goal of a combined 3.3 million ZEVs on U.S. highways by 2025. The International ZEV Alliance is the next step in their commitment to accelerate deployment of zero-emission vehicles.