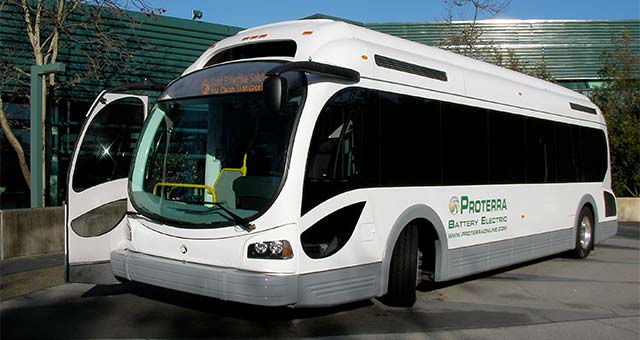 The move positions Proterra to extend its market leadership by taking greater advantage of the region’s innovation culture and to serve the rapid growth in customer demand on the West Coast.

Proterra expects to find new opportunities for collaboration with other transportation innovators in the Bay Area as it launches its new headquarters.

Driven by increasing urbanization and strict air quality regulations, California is leading the transition to electric mass transit. With the 2016 opening of Proterra’s new Southern California manufacturing facility, Proterra is expected to double its production capacity, placing Proterra in an even stronger position to serve its growing list of California customers. The company’s firm orders are now at 123 units, with 317 options contracted, for a total of 440.

“Proterra’s opening of a California headquarters in Burlingame and a new manufacturing facility in the San Gabriel Valley shows that California continues to lead the nation in job creation and electric vehicle production,” said state Senator Jerry Hill, D-San Mateo and Santa Clara counties. “These new buses will be ‘Made in America’ and ‘Made in California’ and they’ll reduce our dependence on oil so we can meet our emissions reduction goals.”

By expanding its footprint in Silicon Valley, Proterra aims to be at the apex of transit innovation. The 34,440 square foot Burlingame headquarters will include a mix of management and support teams from the Advanced Engineering, Finance, Sales, Marketing, and HR departments with 40 employees initially. Proterra’s Greenville facility in South Carolina will continue to manufacture Proterra’s zero-emission electric buses to meet East Coast demand, while Proterra taps the robust high-tech talent pool in the Bay Area.

“The U.S. is in the midst of a complete reinvention of how we transport people and cargo and Silicon Valley is at the center of innovation in new powertrains and energy storage systems,” said Ryan Popple, CEO of Proterra. “As younger generations forgo car ownership and cities demand clean and quiet transit solutions, our goal is to help pioneer this movement.”