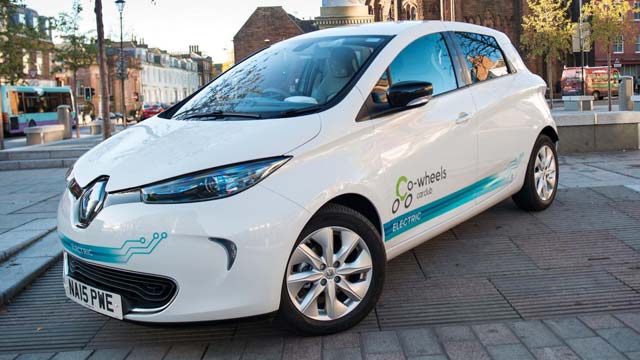 A 20-strong fleet of all-electric Renault ZOEs has enabled the only independently owned national car sharing club to expand its social enterprise-focused operation to over 50 UK locations.

Co-wheels has introduced the innovative Renault ZOE to a number of new sites in Scotland this year, the most recent being in Aberdeen, Dumfries and Dundee. The club, which provides low emission, hybrid and electric cars on a pay-as-you-go basis for organisations and communities, has further locations for EVs in the pipeline with the ZOE confirmed as its electric car of choice.

The club chose the Renault ZOE against other electric cars due to the value it represents and also its driveability. Co-wheels are finding the five-door hatchback very easy to use and ideal for members who have never driven an electric car before. All of the club’s ZOEs have been bought outright or funded via Government grants.

Co-wheels customers can hire a Renault ZOE for only £3.75 an hour or £22.50 for 24 hours. As part of the club’s drive to encourage electric car use, Co-wheels does not make an additional charge for mileage – making the ZOE its most affordable car to hire.

The Renault ZOE is available in three trim levels that comes with a very high level of standard specification, despite its competitive price-tag, which starts from £13,445 after the Government Plug-in Car Grant. Standard specification includes items such as climate control and sat-nav.

ZOE is available with a number of features that make for seamless electric vehicle ownership including remote monitoring of the battery and pre-heating the cabin via your smartphone. ZOE also benefits from the patented Chameleon Charger that allows it to make the most of the widest range of power supplies and also keep charging times to a minimum – charging from zero to 80 per cent full in as little as 30 minutes.  The official NEDC range is 149 miles – Renault estimates that in real-world driving conditions that this equates to around 106 miles in summer and 71 miles in winter. Retail ZOE customers also enjoy the free installation of a fast-charging 7kW wall box at home, giving a standard charge time from 0-100 per cent of just 3-4 hours.

In a UK electric car market up 54.5 per cent September year-to-date, sales of Renault electric vehicles in the UK were up by 92.4 per cent, to 1,316 vehicles, compared to the same period last year – outpacing the overall EV market of 54.4%.