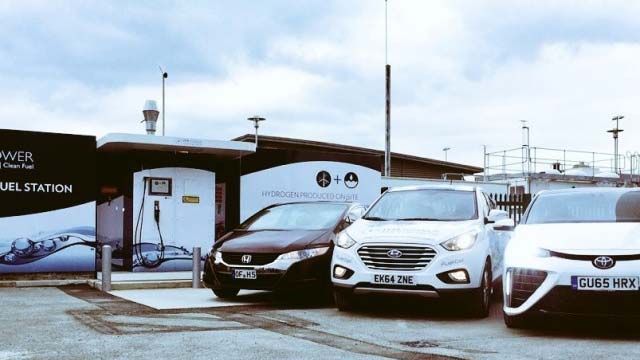 The launch is being supported by Hyundai, Toyota, and Honda who will all be displaying their fuel cell electric vehicles (FCEV).

The site, which as a public access refueling station is the first of its kind in the UK, consists of a 225kW wind turbine coupled directly to an electrolyser, 220kg of hydrogen storage, a hydrogen dispensing unit and a 30kW fuel cell system capable of providing backup power generation for nearby buildings.

The facility has been upgraded as a showcase for ITM Power’s world-class hydrogen generation equipment and is used to provide retail hydrogen fuel services. The M1 motorway was highlighted as a key route for the early deployment of hydrogen refueling in the UK in the published UK H2Mobility Phase 1 Report.

The station, which has been supported by Innovate UK, currently offers hydrogen gas at 350bar which was a specification of the Island Hydrogen (formally known as Eco Island) project. The station will be upgraded early 2016 to provide hydrogen at 700bar as a result of funding from the Office for Low Emission Vehicles (OLEV), this will provide the fuel cell vehicles with a longer range of between 350 – 400 miles and extend the reach of clean emission transportation in South Yorkshire to hydrogen refueling stations elsewhere in the UK, including London.

In a related news, Sweden’s largest, and Stockholm’s first, hydrogen fueling station for fuel-cell cars has been opened in Arlanda by Linde’s Swedish subsidiary AGA.

The new hydrogen fueling station in the vicinity of Stockholm’s airport has a capacity of 180 fillings with a pressure of 700-bar per day. The hydrogen comes from AGA’s facility in Sandviken, where water is split into hydrogen and oxygen with green electricity in an electrolyser.

The hydrogen fueling station is supported by the EU via the HIT-2 project (Hydrogen Infrastructure for Transport).