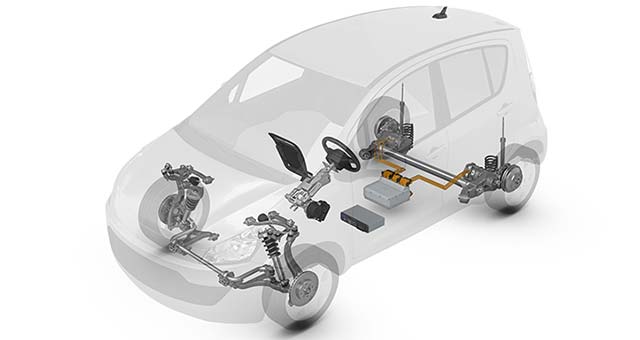 German component manufacturer ZF has unveiled the concept Smart Urban Vehicle with semi-autonomous features and a steering wheel with many functions including hands-on detection (HOD).

The all-electric rear-axle drive eTB (electric Twist Beam), which is mounted close to the wheel, lies at the heart of the Smart Urban Vehicle concept. This drive enables the basic layout of the Smart Urban Vehicle to be redesigned. The front axle is also highly innovative, with steering angles of up to 75 degrees enormously increasing the agility and maneuverability of the prototype.

The ZF Smart Urban Vehicle was built entirely in-house on the basis of a standard subcompact car. The concept vehicle obtains its power from a traction battery, which is housed in three modules altogether on the front and rear axle. ZF’s semi-independent rear suspension eTB (electric Twist Beam) provides the propulsion courtesy of a compact drive unit located on the left and right wheel respectively, each of which produces 40 kilowatts. With axle torque of 1,400 Nm and a maximum 21,000 revolutions per minute, the vehicle, which is tailored to urban traffic, reaches a top speed of 150 kilometers per hour (93 mph).

Thanks to the modified wheel deflection, the turning circle diameter of the Smart Urban Vehicle is reduced to under seven meters – a U-turn, in other words turning through 180 degrees, is possible with no difficulty on a standard two-lane road. The steering movements at the front axle are supported by the torque vectoring system of the rear-axle drive, which distributes the drive force individually to the two rear wheels and enables the vehicle to move off with this kind of large wheel deflection. Hence the concept vehicle can also be maneuvered with ease into extremely small parking spaces.

The advantages of the new front-axle concept come to the fore in combination with the Smart Parking Assist driver assistance function implemented in the Smart Urban Vehicle. The system assists the driver not only in recognizing suitable parking spaces, but can also park the vehicle fully automatically in parallel or perpendicular spaces. The parking aid obtains its information from twelve ultrasound sensors and two infrared sensors on the vehicle’s front-end, rear-end, and flanks; these sensors help find a suitable parking space. The control electronics process the information and control all the systems involved in the parking function – for instance, the electric drive and the required steering angle of the electric power steering. The driver can interact with the vehicle during the process via the display in the cockpit or trigger the parking function once they exit the vehicle by using an application on a mobile device, e.g. a smartwatch. The Smart Urban Vehicle then automatically searches the surroundings at walking pace for a suitable gap and automatically initiates the parking process.

For the future, the Smart Parking Assist opens up potential scenarios which provide additional benefits for the driver: The driver can get out at the destination, leaving the vehicle to head off autonomously for a parking garage, thus saving valuable time in the process.

The cloud-based ZF PreVision Cloud Assist driver assistance function provides maximum range and driving safety in the Smart Urban Vehicle. Unlike purely GPS-based systems, the ZF study not only takes into account geometry data and information on the permissible top speed, but also stores data in the cloud on the vehicle position, currently driven speed, and lateral and longitudinal acceleration for every journey. If the driver follows the same route again, the system calculates the optimum speed for an approaching bend on the basis of these empirical data and actual vehicle data. The assistance function then throttles back the torque early on before entering the bend, to the point where the bend can be negotiated without any mechanical braking. All of which not only protects the vehicle’s battery and braking system, but also provides greater safety particularly on blind corners.

The driver is kept informed at all times about the intervention of PreVision Cloud Assist: The multifunction steering wheel, which ZF uses in the Smart Urban Vehicle, features an OLED display in the steering wheel rim in the driver’s direct field of view. This display shows, for instance, how much drive torque the driver assistance system throttles back before entering the bend – or provides again after the bend.

The driver, however, remains in direct contact with the Smart Urban Vehicle using HOD. The capacitive system covers the entire steering wheel and detects whether the driver is holding the steering wheel. The electronic control unit built into the steering wheel converts the identified state into a digital signal and sends this to the vehicle via the LIN (Local Interconnect Network). Depending on the situation, this alerts the driver or activates the available assistance systems.[wzslider height=”400″ lightbox=”true”]