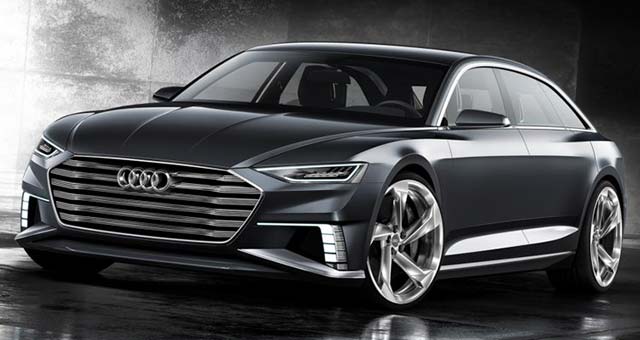 The Audi Prologue Avant concept car with its stretched roof which the brand is presenting at the Geneva Motor Show gives a look into the future – with the new and emotion filled design language that Audi has initiated with its study in the coupé, the Prologue.

In November 2014 at the Los Angeles Auto Show, Audi presented the Audi Prologue concept car, giving a look to the brand’s future design language. Only four months later, the premium manufacturer is showing a variant of its visionary concept at the Geneva Motor Show.

The Audi Prologue Avant combines dynamics, form and function in a perfect synthesis. With a length of 5.11 meters (16.8 ft) and a width of 1.97 meters (6.5 ft), the five-door car with its pioneering body concept positions itself clearly in the luxury class. At the same time, it offers unmistakeable sportiness and variability. Technology is becoming an experience, both outside and inside: The driver and up to three passengers can enjoy a luxurious interior and are digitally connected thanks to a state‑of‑the‑art infotainment architecture and connect technology.

The luxurious interior is kept in dark shades. Here as well, the show car offers a new experience: The straight‑lined architecture forms one whole with its display and control concept. The consistent front of the dashboard is composed of three touch displays. Moreover, the driver and up to three passengers can establish a digital communication via two OLED‑displays made from organic LEDs. The extremely slim, detachable OLED displays in the rear – a spin-off of the Audi tablet from the new Audi Q7 – provide passengers with on-demand information and entertainment.

Technology close to series production
The Audi Prologue Avant uses technology which is close to series production. It is equipped with the plug‑in hybrid drive from the Audi Q7 e‑tron quattro which achieves even higher performance in the show car. 335 kW (455 hp) of system power output by the 3.0 TDI engine and 750 Nm (553.2 lb-ft) of system torque and the electric motor in combination make the car sprint from 0 to 100 km/h (62.1 mph) in 5.1 seconds.

The Audi Prologue Avant consumes an average of only 1.6 liters per 100 kilometers (147.0 US mpg) according to the NEDC standard for plug-in hybrid vehicles – corresponding to 43 grams of carbon emissions per kilometer. The lithium-ion battery pack in the rear storing 14.1 kWh of energy gives the car a range of 54 kilometers (33.6 mi) in pure electric drive mode.

The chassis is equipped with adaptive air suspension and the dynamic all‑wheel‑drive steering system – thus combining comfort, sportiness, handling and stability on a new performance level.

With its AWC (Audi wireless charging) technology which Audi is developing for series production, the battery can also be charged inductively. AWC technology provides energy from a floor plate which is connected to the power grid and which can be embedded on or into the asphalt. This plate integrates a primary coil and an inverter (AC/AC converter). When active, this coil induces a magnetic field of alternating current. On the basis of state-of-the-art technology, Audi uses 3.6 kW of power as provided by a wall socket with a maximum of 16 amps of charging current.

Elegant experience: the interior
The spacious interior of the Audi Prologue Avant has the character of a luxurious lounge. Sinewy taut, calmly flowing lines and slender geometric bodies convey a feeling of expanse, lightness and tranquility. The long center console with its pass-through also appears to hover, as do the slender front seats, whose rails are mounted on the tunnel and side sills.

The instrument panel stretches horizontally from one side to the other, thus creating a wide impression in the interior. It lowers itself towards the driver and the co-driver on two levels. The upper level, like a roof, lies over the Audi virtual cockpit future and the wide air vents. It forms part of the wrap‑around encompassing the interior and luggage compartment like a horizon.

Both rear passengers can enjoy individual seats with a spacious ambience.

All of the interior details demonstrate Audi’s high-quality design and uncompromising claim. A perforated trim panel covers the air vent; it moves down as soon as the air conditioning is set higher. The newly designed flat shift‑by‑wire selector lever for the eight-speed tiptronic is smoothly integrated in the center console.

Three-part display: the instrument panel
The elegant design architecture of the Audi Prologue Avant show car blends in with a game-changing, new display and control concept enabling digital interaction between the driver and his passengers. Across its full width, the front of the dashboard is designed as a display surface which integrates three touch displays. Massive aluminum frames surround the two driver-faced displays left and right of the steering wheel. The left one serves to control the assist functions, the right one is for multimedia management.

The front passenger faces a widescreen display that is integrated into the full surface of the instrument panel; it is used to configure entertainment features individually and conveniently. With a wiping movement, the front passenger can send media content such as music playlists to the right driver display or navigation data to the Audi virtual cockpit behind the steering wheel.

On the console of the center tunnel, there is another display for text entry, air conditioning and infotainment designed for the driver. It consists primarily of an extremely thin, bendable OLED film (OLED: organic light emitting diodes), and it displays extremely sharp images that are rich in contrast. When inactive, the OLED display is in a flat retracted position; as soon as the vehicle is started, it moves up at an angle. The curved display ensures a constant ergonomic distance to the driver’s hand, his wrist calmly resting on the eight‑speed tiptronic selector lever.

Within the driver’s field of view lies the Audi virtual cockpit future. High-resolution displays and three mirrors generate a virtual visual stage with three levels. In the navigation view, for instance, the first level presents information that is important for driving; levels two and three generate the depth effect in the cockpit. Thanks to this staggered approach, information is structured better and is easier to grasp. According to driving style, content and colors will change in the Audi virtual cockpit future – when driving tempers unleash, for instance, the display changes to sport mode.

Comfort and sport combined: the chassis
The chassis of the Audi Prologue Avant is also packed with high-end series production technology. The adaptive air suspension sport – an air suspension system with controlled damping – offers a wide spread between smooth power transmission and tight handling. Front and rear axles are lightweight five‑arm wishbone constructions. The 20-inch brake disks are made from carbon fiber ceramics.

The dynamic all-wheel-drive steering system resolves the classic conflict between dynamic handling and stability. The system combines a dynamic transmission steering system on the front axle with an additional steering system for the rear wheels where an electric motor actuates two tie rods.

When the driver steers at low to moderate speeds, the rear wheels turn up to five degrees in the opposite direction of the front wheels. This gives the responsiveness of the car a further boost and reduces its turning circle. At higher speeds, the Audi Prologue Avant handles swerving very calmly and with superior reliability: in such a manoeuvre, the rear wheels turn in the same direction as the front wheels.[wzslider height=”400″ lightbox=”true”]