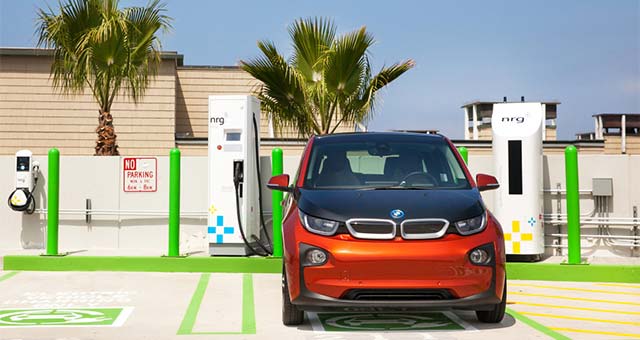 NRG eVgo, a subsidiary of NRG Energy, Inc., continues to make life easier for electric vehicle drivers on a national scale, with its ambitious expansion of the largest Fast Charger network in the nation.

Stretching from California’s sunny coast to the busy roads of Washington, D.C. and beyond, NRG eVgo is in ten national markets and will be in more than 25 markets over the next two years. eVgo makes it easier than ever for EV drivers to access a network of reliable, user-friendly charging solutions located at homes, work and convenient retail locations.

The eVgo network can charge all of the more than 300,000 EVs on the road from 13 auto manufacturers. The network includes powerful fast chargers that approach the speed of traditional gas pumps providing approximately 40 miles of range in just 15 minutes of charging. Drivers can easily locate charging station locations with an interactive map on the eVgo website and most active eVgo stations feature 24/7 customer service.

“NRG’s strategic expansion of our eVgo network integrates a family of in-home and away-from-home chargers to meet the needs of consumers who drive a variety of electric vehicles. The continued growth of the eVgo network provides range confidence to electric vehicle drivers and the growing number of consumers who are ready to embrace the EV movement and take a fresh look at their personal transportation,” said Arun Banskota, president of NRG eVgo. “We are meeting the daily fueling demands of EV drivers in some of the country’s largest markets, and we look forward to providing these services nationally, in partnership with auto manufacturers and dealers, retail partners and work places.”

eVgo’s agreements with Nissan across the nation and BMW in California provide new EV drivers with paid subscriptions when they buy their EVs.

Last year demonstrated a significant 20-fold increase in customers throughout the network. As it enters 2015, NRG eVgo is aggressively working to meet the needs and growth patterns of each region it serves with superior customer service. In particular:

– California – One of the country’s earliest adopters of electric vehicles, the Golden State has more than 120 Fast Chargers, the highest number of Fast Chargers amongst all providers in California.

– Chicago – In the heart of the Midwest, eVgo is hard at work restoring existing Fast Charger stations, positioning itself for network expansion and making it truly comprehensive. There are 26 chargers in the Chicago area, and the company is adding more.

– Atlanta – Atlanta is one of the fastest growing metropolitan markets for EV sales, and eVgo is helping and simplifying consumers and businesses use of electric vehicles. Atlanta already has 12 Fast charging stations, and we have plans to add many more.

– Mid-Atlantic Region – eVgo chargers can be found in major metropolitan areas covering portions of Washington D.C. Virginia, and Maryland. This area currently has 24 active eVgo stations with another one expected to be online by the end of the month.

The NRG eVgo national network is continuing to expand, including its first five stations in Tennessee, and will more than double the number of markets it serves in 2015 and 2016. Future expansion of the network will allow EVs to confidently drive along major corridors, including San Diego to Seattle, and Miami to Boston.