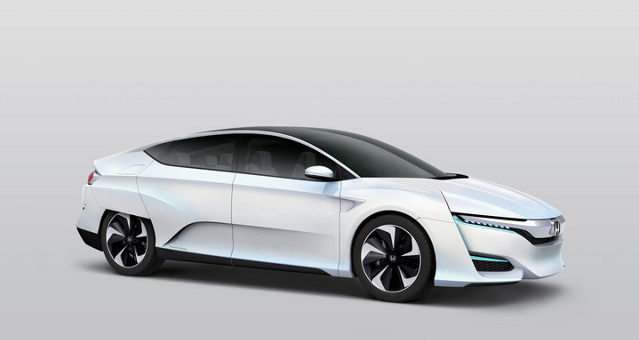 The Honda FCV Concept showcases the styling evolution of Honda’s fuel-cell vehicle anticipated to launch in Japan by March of 2016, followed by U.S. and Europe.

As the next progression in Honda’s dynamic FCV styling, the Honda FCV Concept features a low and wide aerodynamic body with clean character lines. The interior strives to achieve harmony between man and machine by taking advantage of new powertrain packaging efficiencies delivering even greater passenger space than its predecessor, the FCX Clarity, including seating for up to five people.

In an effort to support the wider introduction of fuel-cell vehicles, Honda will make an announcement at the 2014 Los Angeles Auto Show about its commitment to help expand and accelerate California’s public hydrogen refueling station network.

Next-Generation Honda Fuel-Cell Vehicle
Honda’s next-generation fuel-cell vehicle launching in 2016 applies a fuel-cell powertrain that fits completely within the front engine compartment of the vehicle, allowing for efficiencies in cabin space as well as flexibility in the potential application of fuel-cell technology to multiple vehicle models in the future. Significant technological advancements to the fuel-cell stack have yielded more than 100kW of power output. The power density is now 3.1kW/L, an increase of 60 percent, with the stack size reduced 33-percent compared to the Honda FCX Clarity. The next-generation Honda FCV is targeted to deliver a driving range of more than 300 miles with a quick refueling time of about three to five minutes at a pressure of 70 Mpa.

Honda has led the industry for nearly two decades in the development and deployment of fuel-cell technology through extensive real-world testing, including the first government fleet deployment and retail customer leasing program. Since the introduction of its first generation fuel-cell vehicle, the FCX, in 2002, Honda has made significant technological advancements in fuel-cell vehicle operation in both hot and sub-freezing weather while meeting customer expectations and safety regulations.

Honda has deployed vehicles in the U.S. and Japan, including the FCX Clarity, which was named the 2009 World Green Car. Honda has delivered these vehicles to individual retail consumers in the U.S. and collected valuable feedback concerning real-world use of both fuel-cell vehicles and public hydrogen stations.

Honda’s current fuel-cell vehicle, the FCX Clarity, launched in July 2008 and was quickly heralded as a technological breakthrough in the areas of design, packaging and efficiency. As the world’s first dedicated platform fuel-cell vehicle, the FCX Clarity features a striking silhouette and a low-slung cabin. With the V-flow fuel cell stack positioned in the center tunnel of the vehicle and the electric motor located down low in the front of the vehicle, Honda was able to maintain the Clarity’s futuristic styling while allowing for 240 miles of driving range.

In the effort to speed the advance of a refueling infrastructure outside of California, in May 2013, American Honda joined the public-private partnership H2USA, which brings together  automakers, government agencies, hydrogen suppliers, and the hydrogen and fuel-cell industries to coordinate research and identify cost-effective solutions to deploy infrastructure that can deliver affordable, clean hydrogen fuel in the United States.

In June 2013, Honda entered into a long-term collaborative agreement with General Motors to co-develop the next-generation of fuel-cell systems and hydrogen storage technologies, aiming for the 2020 timeframe. The collaboration expects to succeed by sharing technological expertise, economies of scale and other benefits.

Honda Fuel-Cell Vehicle Firsts:
The original FCX became the first EPA- and CARB-certified fuel-cell vehicle in July 2002. The FCX also was the world’s first production fuel-cell vehicle, introduced to the U.S. and Japan in December 2002.

– The Honda FCX was the first fuel-cell vehicle to start and operate in sub-freezing temperatures (2003).

– The FCX was the first fuel-cell vehicle leased to an individual customer (July 2005).

– Honda was the first manufacturer to create a fuel-cell vehicle dealer network (2008).