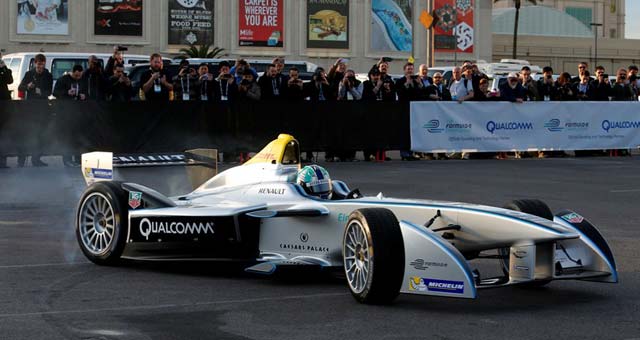 Formula E’s new fully-electric race car, the Spark-Renault SRT_01E,  made its first ever public demonstration, entertaining crowds with a high-speed display around the Mandalay Bay Resort & Casino in Las Vegas.

Capable of speeds in excess of 150mph (241 km/h), the zero emission single-seater was driven by former Formula One driver Lucas di Grassi and gave invited guests, media and onlookers their first chance to see and hear the cars that will compete in the new FIA Formula E Championship – the world’s first fully-electric racing series beginning in September.

Formula E is a new FIA championship which will compete on 10 city-centre circuits around the globe including two races in the US – Miami and Los Angeles – which take place in the spring of 2015. Ten teams, each with two drivers, will go head-to-head to create a unique and exciting racing series designed to appeal to a new generation of motorsport fan, whilst accelerating the electric vehicle market and promoting sustainability.

Unveiled in September 2013, the Formula E race car has been designed and built by French-based Spark Racing Technology together with a consortium of the leading names in motorsport including Dallara (chassis), Williams (battery design), McLaren (powertrain & electronics), Renault (overall system integration) and Michelin (tyres).

The event was also held in conjunction with the International CES, a global consumer electronics and technology tradeshow, together with Qualcomm Incorporated, one of Formula E’s Founding Partners and the championship’s Technology Partner.

The Formula E race car will now be displayed on Qualcomm’s stand at the CES Show where the leader in mobile space will be showcasing its Qualcomm Halo Wireless Electric Vehicle Charging (WEVC) – a revolutionary new technology that will be fitted to the championship’s safety cars.[wzslider height=”400″ lightbox=”true”]