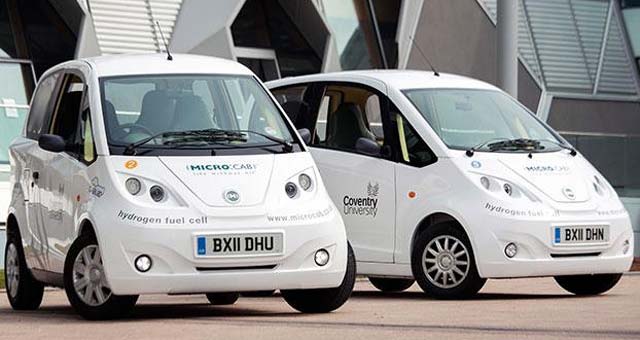 Coventry University and its spin-off firm Microcab are due to demonstrate their hydrogen fuel cell vehicle at the 2013 Automotive Engineering Show at the NEC in Birmingham, UK next week.

Microcab, which is based at the University’s Technology Park, will exhibit its H2EV vehicle – a hydrogen fuel cell car whose only exhaust emission is water.

Microcab’s pioneering fleet of zero emission H2EVs – each of which have a 55mph top speed and 180 mile range on a full tank – was recently rolled out into the world’s largest hydrogen fuel cell trial which was launched in northern Europe this summer.

As part of the SWARM project, ten Microcabs will be rolled out onto roads in the Midlands to be trialled in everyday situations by Birmingham City Council, Coventry University and the University of Birmingham.

SWARM stands for ‘Demonstration of Small 4-Wheel fuel cell passenger vehicle Applications in Regional and Municipal transport’. The project is funded by the European FCH JU (Fuel Cells and Hydrogen Joint Undertaking) and comprises 17 partners including OEMs, research institutes and industrial partners from across Europe.

The Automotive Engineering Show 2013 will take place at the NEC in Birmingham from Tuesday 12th – Wednesday 13th November.