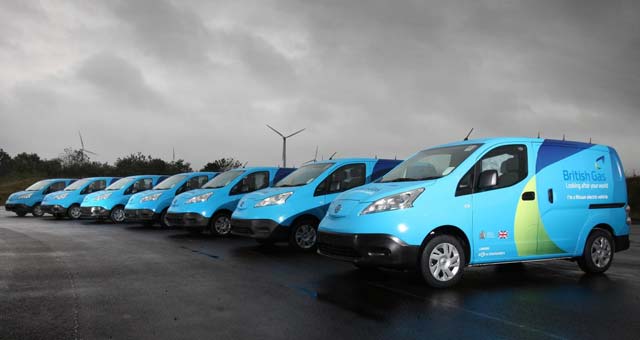 British Gas is piloting 28 Nissan e-NV200 vans throughout the winter to determine the future viability of 100% electric vehicle technology as part of its 13,000 home service vans fleet.

Run in collaboration with Hitachi Capital Commercial Vehicle Solutions and Gateshead College, the e-NV200 pilot will see the four strategic partners working together during this testing period.

Nissan has been globally piloting the e-NV200 for two years ahead of the van going on sale to the public next year. As the UK’s largest ever electric commercial vehicle evaluation to date, the winter test underlines the importance of the relationship between Nissan and British Gas to be involved in this important phase of zero-emission vehicle testing.

The pilot of the Nissan e-NV200 electric vans is being conducted nationwide from November 2013 until April 2014 to assess how the vans perform in winter conditions during typical British Gas home services daily usage patterns.

As part of a long-standing contract to manage the entire fleet for Centrica, British Gas’ parent company, Hitachi Capital Commercial Vehicle Solutions’ dedicated British Gas team has been involved with extensive testing to prove the concept and played a key role in rolling out to engineers and then providing on-going 24 hour support.

Hitachi Capital has also undertaken IMI training to a high level in conjunction with Gateshead College and will be involved in generating accurate total cost of ownership modelling to compare this technology with conventional the internal combustion engine drivetrain.

Available on forecourts next year, the Nissan e-NV200 is a breakthrough zero emission compact van that promises an dramatic reduction in running costs while also helping the environment by bringing CO2 emissions down to zero at the point of use. As British Gas home services engineers operate within a defined zone, the Nissan e-NV200 can easily operate within a British Gas’ daily usage pattern.[wzslider height=”400″ lightbox=”true”]