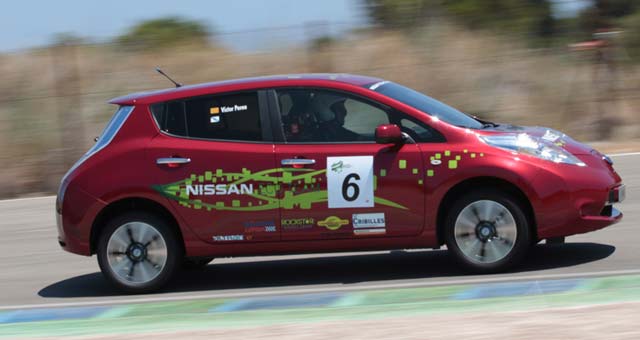 Nissan employees working at the company’s Barcelona Technical Centre are proving that’s there’s more to motorsport than striving for the fastest lap times.

They are taking part in a new concept in motorsport: ECOseries, which rewards efficiency and fuel economy rather than outright speed. Uniquely it is open to all types of road vehicle and to anyone with a driving licence.

The employees – who are all taking part in the series in their spare time – are using three of Nissan’s most fuel efficient vehicles for the competition: Nissan JUKE 1.5 dCi, Nissan Micra DIG-S and in the zero-emission category, Nissan LEAF.

ECOseries, which is based in Spain and combines track and road-rally events over the season, attracts entries from a wide variety of road cars. Aside from the Nissan team, there are cars from rival manufacturers including Peugeot, Toyota, Volkswagen, Porsche and Mercedes-Benz.

As well as conventional diesel and petrol-powered cars there are hybrids, alternative fuel cars and even fuel cell prototypes taking part. The series is run by the Catalan Automobile Federation (FCA) with the support of the Catalan Energy Institute (ICAEN) and was first run in 2010.

With hour-long races at tracks such as the Circuit de Catalunya Grand Prix circuit and the Carrera Parc Motor Castelloli, the object of the series is to drive as quickly, efficiently and as economically as possible.

The Nissan Ecoteam, which is entered under the Nissan Technical Centre Europe (NTCE) banner, is made up entirely of volunteers from the Barcelona-based NTCE, NMISA Barcelona plant, Iberia Regional Business Unit and supplier companies.

Their involvement is part of an internal Performance Innovation activity designed to promote team work and diversity ­- throughout the year, the team’s Nissan Micras have been driven by ladies and ladies also drove all three Nissan LEAFs at the final round held at the end of September – as well as demonstrating the efficiency of the current range of Nissan products.

The cars are largely standard, though some modifications are allowed in the interests of greater efficiency. The Nissan Ecoteam made changes to improve aerodynamic efficiency as well as removing elements of the interior to reduce weight. Changes were also made to the chassis settings, to the centre of gravity and to engine calibrations specifically with race performance in mind.

Their day-to-day work at NTCE was clearly useful when it come to making these alterations. Specialist teams whose ‘day job’ involves working in the engine calibration, safety and security, ride and handling and drivetrain areas were able to draw on their experience and to transfer their knowledge and skill to the race cars.

The races are split into two disciplines: efficiency and regularity. In the first category the aim is to be the quickest vehicle on track while using less fuel than the maximum consumption set in the rules. The actual figure varies according to the type of car and the size of its engine.

In the regularity discipline, the driver has to decide on a lap time and then get as close to that target time lap after lap, with penalty points for being over or under the time. The winner is the car/driver who picks up fewest penalty points overall.

Over the season the Nissan team has enjoyed some wins and 33 podium finishes as well as posting some exceptional fuel consumption figures: in the final race of the year, the Nissan Juke driven by Marti Fabregat and Ivan Andrey took overall victory using just 5.5 litres of diesel after a hour of hard and fast racing.

In the EV category, the Nissan LEAFs and a Mercedes A-Class E-Cell have been fighting for outright honours. Although two of the team’s three LEAFs are essentially standard, a third was introduced as a mobile test lab, running in the series’ EV prototype category. For the final race, its battery pack was doubled in size to take battery performance to 48kWh and allowing it to perform on more equal terms with the 36kWh Mercedes.

In the end, although the LEAF was quicker than the A-Class and ran at the same pace as the Nissan Juke with no potential range issues to affect the car’s progress, the Mercedes took outright honours by lapping closer to its regularity target.[wzslider height=”400″ lightbox=”true”]