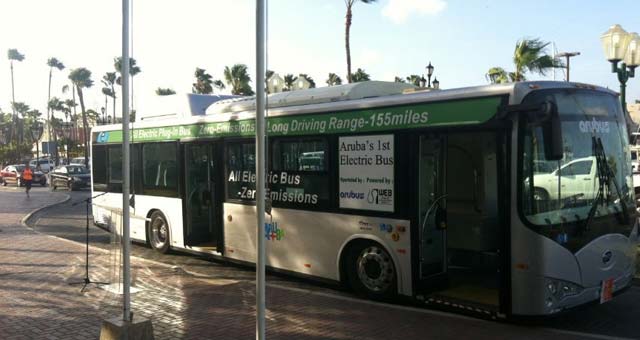 The bus delivery for revenue service is only the first step of a memo-of-understanding signed in June, 2013 between BYD and Aruba outlining Aruba’s plans to be the first Nation with a carbon-neutral footprint and complete energy independence, with only clean sustainable renewable power sources and electrified public transportation.

Aruba plans to use BYD green-technologies to pursue its goal of becoming an emissions-free Nation by the year 2020. The first of four major objectives in the MOU was electrifying public transportation with zero-emissions vehicles.

Prime Minister Mike Eman stated, “In our transition phase towards 100% sustainability, BYD will support Aruba by demonstrating how to convert all our vehicles, including cars, buses, taxis and all private and public vehicles into electrified transportation”. The Aruba government is initially leasing the electric bus until March 2014 to evaluate the service characteristics before an additional 3-4 vehicles are ordered for the next phase of implementation. Arubus Director Teo Croes stated, “I am very happy that today we can have the first electric bus in the Caribbean and set a new standard in public transportation, not only for the Caribbean but for other countries in the region as well. After visiting the Netherlands and Bogota Colombia to test buses, we were convinced that the BYD E-bus was the bus that met our transportation goals. Together with TNO and WEB, we will test the bus for several months and submit the final report to the government. By 2014, we are aiming for three more buses and hopefully many more after that.”

The Island currently boasts 15% renewable generation sources (from Wind), and these electric buses will immediately take advantage of this renewable power and each addition of renewable clean energy generation as they are implemented by the national government (plans include solar and bio-mass/waste generation). Finance Minister Mike de Meza observed, “We are starting the 4th Aruba green conference with a beautiful surprise, the first bus in the Caribbean region that drives fully on pure electric power. Aruba is a front-runner in the Caribbean and this bus is a part of the vision of the ministry of Prime Minister Mike Eman. Our Prime Minister knew how to push hard in this direction as well as my other colleagues and will continue to do so until all buses are fully electrified.” Electrified vehicle platforms are adaptable to whatever the “fuel” source and can immediately clean up city pollution with each addition of clean energy sources (unlike natural-gas or diesel platforms that are tied to one fuel source). Aruba has experienced periods of time, at night, when their wind resources approach 35% of electric supply—transportation that only charges at night, takes better advantage of the island’s wind energy portfolio allowing the Utilities to optimize and level-load their demand profiles. Transportation Minister Otmar Oduber said, “This bus will cost Arubus 60% less than fuel driven buses in service at the moment, saving Arubus over 1.2 million florins (~$600,000 USD per bus over a lifetime of greater than 12 years, italics added). This bus will be in service for about 5 months and the bus will be rigorously tested and researched by an independent research organization to establish the efficiency of the bus. The vision of the ministry together with Arubus and WEB is to have 4 more buses on Aruba by 2014, followed by 16 more buses to have a total of 20 buses in service before 2020. Four years ago the ministry of Mike Eman had a vision in which Aruba could and would be fossil fuel independent to generate electricity and to have a fully electrified public transportation including the independent taxis. With this bus we are showing our commitment and realizing our vision.”

The government will now be able to consider creative ways to promote zero-emissions taxis like the BYD e6 electric taxi – one idea being floated is to give taxi-cue priority at the airport for private drivers of zero-emissions vehicles. Micheal Austin BYD Vice President stated that, “There is a sense of urgency embraced by the leaders in Aruba to transform from a fossil-fuel-based economy to a renewable, sustainable and adaptable platform. The urgency seems to be seeded by economic reasons and then driven and supported by an environmental social conscience here. There are opportunity costs for each day that goes by that Aruba does not move to independent and domestic power sources and transportation platforms.”