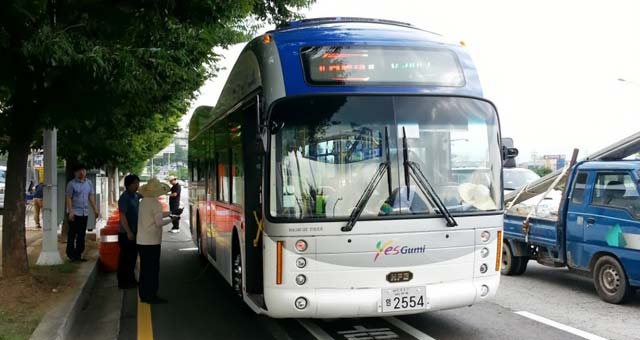 The Online Electric Vehicle (OLEV), developed by the Korea Advanced Institute of Science and Technology (KAIST), is an electric vehicle that can be charged while stationary or driving, thus removing the need to stop at a charging station.

Likewise, an OLEV tram does not require pantographs to feed power from electric wires strung above the tram route.

Following the development and operation of commercialized OLEV trams (at an amusement park in Seoul) and shuttle buses (at KAIST campus), respectively, the City of Gumi in South Korea, beginning on August 6th, is providing its citizens with OLEV public transportation services.

Two OLEV buses will run an inner city route between Gumi Train Station and In-dong district, for a total of 24 km roundtrip. The bus will receive 20 kHz and 100 kW (136 horsepower) electricity at an 85% maximum power transmission efficiency rate while maintaining a 17cm air gap between the underbody of the vehicle and the road surface.

OLEV is a groundbreaking technology that accelerates the development of purely electric vehicles as a viable option for future transportation systems, be they personal vehicles or public transit. This is accomplished by solving technological issues that limit the commercialization of electric vehicles such as price, weight, volume, driving distance, and lack of charging infrastructure.

OLEV receives power wirelessly through the application of the “Shaped Magnetic Field in Resonance (SMFIR)” technology. SMFIR is a new technology introduced by KAIST that enables electric vehicles to transfer electricity wirelessly from the road surface while moving. Power comes from the electrical cables buried under the surface of the road, creating magnetic fields. There is a receiving device installed on the underbody of the OLEV that converts these fields into electricity. The length of power strips installed under the road is generally 5%-15% of the entire road, requiring only a few sections of the road to be rebuilt with the xembedded cables.

OLEV has a small battery (one-third of the size of the battery equipped with a regular electric car). The vehicle complies with the international electromagnetic fields (EMF) standards of 62.5 mG, within the margin of safety level necessary for human health. The road has a smart function as well, to distinguish OLEV buses from regular cars—the segment technology is employed to control the power supply by switching on the power strip when OLEV buses pass along, but switching it off for other vehicles, thereby preventing EMF exposure and standby power consumption. As of today, the SMFIR technology supplies 60 kHz and 180 kW of power remotely to transport vehicles at a stable, constant rate.

After the successful operation of the two OLEV buses by the end of this year, Gumi City plans to provide ten more such buses by 2015.