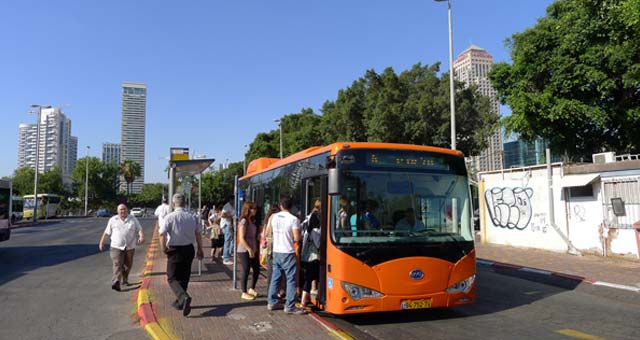 The operator expects to fully integrate the ebus into its normal operation since its range on a single charge of 250km in normal urban conditions plus the ability to recharge in four to five hours will match its normal service requirements.

The introduction of the BYD electric bus – the first full size pure electric bus to enter passenger carrying service – into the Dan fleet is significant since Dan is planning to invest €85 million on electric buses over the next five years, meaning that 25% of its fleet will be emissions free. Dan notes that the maintenance costs for electric buses are 25% lower than for diesel buses, with the price of electricity per kilometer being one third of the cost of diesel.

Dan currently operates close to 1,300 buses and hundreds of minibuses in the Tel Aviv metropolitan area.

The BYD electric bus integrates several cutting-edge technologies including two in- wheel, electric motors capable of a cruising speed over 88 km/h (or > 55mph), and a first of its kind environmentally-friendly Iron-Phosphate Battery (LiFePO4). BYD’s electric bus can drive for 250 km (155 miles) even in heavy city traffic after a full, 5 hour, night-time charge. The ebus is a proven, full-size 12 meter (40 foot) bus which has completed more than 18 million kilometers (or 11.4 million miles) by the end of July 2013 and has been evaluated in many major cities across the world.

In a related news, BYD has opened a new assembly plant where it will produce the BYD 3.5T electric forklift with its own LiFePO4 batteries. According to the BYD, the 3.5T forklift truck accounted for approximately 50% of forklift sales in China’s market and 80% are powered by fuel rather than electricity.

BYD claims that the 3.5T electric forklift has a long life, a high change/discharge rate and is virtually maintenance-free.[wzslider height=”400″ lightbox=”true”]