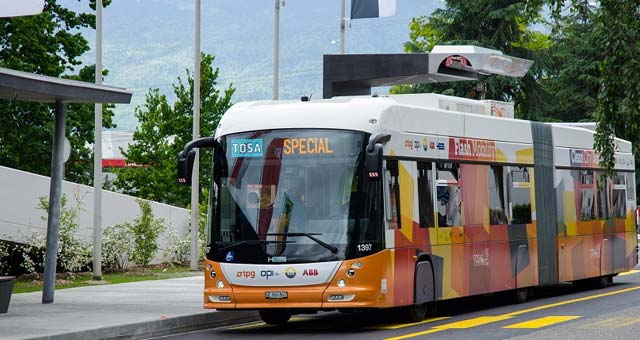 ABB announced at the 60th congress of the International Association of Public Transport (UTIP) in Geneva that it is working together with the city’s public transport company (TGP), the Office for the Promotion of Industries and Technologies (OPI) and the Geneva power utility SIG on the TOSA electric bus system pilot project.

The new boost charging technology will be deployed for the first time on a large capacity electric bus, carrying as many as 135 passengers. The bus will be charged directly at selected stops with a 15-second energy boost while the passengers enter and leave the bus, based on a new type of automatic flash-charging mechanism. The pilot project runs between Geneva airport and the city’s international exhibition center, Palexpo.

TOSA (Trolleybus Optimisation Système Alimentation) is a zero-carbon-emission solution as the electricity used comes entirely from clean hydro power. The charging time is so quick that it does not interfere with the bus schedule and improves the urban environment and landscape as it does not need overhead lines while providing greater route flexibility. The system uses a laser-controlled moving arm, which connects to an overhead receptacle for charging at bus shelters, instead of the usual trolley poles to overhead lines.

The flash-charging technology and the onboard traction equipment used in this project were developed by ABB and optimized for high-frequency bus routes in key urban areas, carrying large numbers of passengers at peak times. Onboard batteries can be charged in 15 seconds with a 400 kilowatt boost at selected stops. At the end of the bus line a 3 to 4 minute boost enables the full recharge of the batteries. Thanks to an innovative electrical drive system, energy from the roof-mounted charging equipment can be stored in compact batteries, along with the vehicle’s braking energy, powering both the bus and its auxiliary services, such as interior lighting.

“Through flash charging, we are able to pilot a new generation of electric buses for urban mass transport that no longer relies on overhead lines,” said Claes Rytoft, ABB’s acting Chief Technology Officer. “This project will pave the way for switching to more flexible, cost-effective, public transport infrastructure while reducing pollution and noise.”