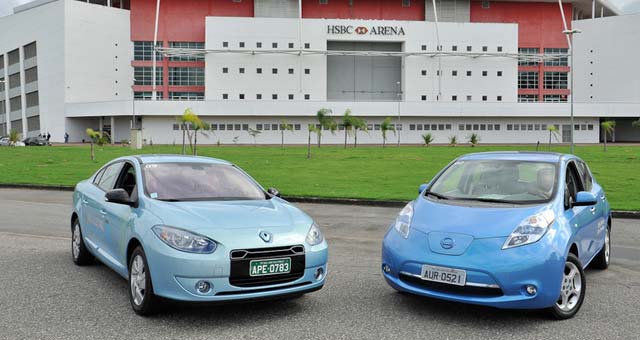 It was in a celebration mood, and could not be otherwise, that the always friendly and charismatic François Dossa, president of Nissan Brazil, made official the sponsorship of Grêmio Recreativo Escola de Samba Acadêmicos do Salgueiro for the 2014 Carnival on behalf of the Renault-Nissan Alliance.

The announcement was made on Monday, May 20, at 19pm, at the Samba School headquarters in Andarai, with the presence of journalists, dealerships, suppliers and guests. Standing between two electric cars (a Nissan Leaf and Renault Fluence ZE), the president of Salgueiro Regina Celi along with the Samba School director Marcelo Montero stated that “the sponsorship is more than an investment: it is the beginning of a long and successful partnership.” Never before in history had an assembly of automakers sponsored a samba school. The Salgueiro was the very first to make this achievement. And it started with the “right foot” because it attracted at once two heavyweights of the global automotive industry.

The partnership began with a visit of the Renault-Nissan global president, Carlos Ghosn, to the Salgueiro School, at the beginning of the year. The amount of money involved in this sponsorship has not been disclosed, but when I pointed out that the budget of Salgueiro is around 10 million, François Dossa noted that the value for the sponsorship was far from it.

In a conversation with VerdeSobreRodas, Dossa said that his desire is to build a successful story with the city. Hence, nothing better than starting with the carnival that is a source of pride for the entire population. The Rio de Janeiro is where partner Renault has the largest market share in the country (6.72%), and that is one more reason on why Nissan have chosen the city as headquarters.

Dossa said that only through benefits for production and consumption will be possible to provide a competitive price for EV. So, to make electric cars accessible, it is necessary that the government and private sector work in a collaborative effort. He also believes that consumers need to be better informed about the advantages of EVs. Consumers have not realized yet that the EVs are very safe and has many benefits for the environment and therefore for the present and future inhabitants of our planet.

Dossa also said that Renault-Nissan Alliance aims to achieve 16% market share in Brazil by 2016 (currently holds both 8.7%). Since the major urban centers like São Paulo have a growth capacity exhausted, the greatest growth potential is in the countryside, added Dossa. In January next year Nissan will launch a plant in Resende (a city in Rio de Janeiro) with capacity to produce 200,000 vehicles per year.

However, the task will not be easy, since competitors have invested in new models for the Brazilian market. Nissan finished 2010 in 12th position among the twelve largest automakers in the country. In 2011, Nissan got to the 11th position, and in 2012 it got to the 7th  position. This was its best result since its arrival in Brazil.

Hence, from January to April 2013, Nissan got stuck in 9th position because it was affected by the new rules of the Brazilian government, which established limits for importing cars. If it wasn’t for this, it would be better placed. The brands in better position than Nissan in April 2013 were: Hyundai (8°), Honda (7°), Toyota (6°) and its partner Renault (5°), Ford (4°), General Motors (3°), Volkswagen (2nd) and Fiat (1°).