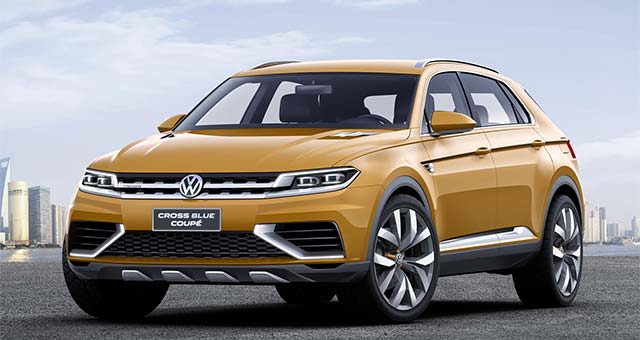 Visitors to the 2013 Shanghai Auto Show will get a glimpse of the future design direction of Volkswagen SUVs, in the shape of the CrossBlue Coupe, which makes its debut there this week.

At the front, the radiator grille trim – consisting of two polished aluminum struts and the VW logo – is a 3D element extending into the headlights.  The lateral ends of the upper strut are used for the daytime running lights, creating a distinctive light signature.

Along the side – under the steeply raked C-pillars – the ports for the fuel tank and battery were uniformly integrated into the design of the CrossBlue Coupe.  As is usual with Volkswagen, the fuel filler neck is located under a lid on the right side of the vehicle, while the cover for the electrical outlet is located symmetrically on the left side.  It consists of one socket for charging the high-voltage battery and another for connecting electric devices; this interface (16 A, 230 V) makes the CrossBlue Coupe a generator, too.

The prominent tailpipes are designed in stainless steel, and are integrated into a polished aluminum trim panel that runs horizontally along the back of the Coupe.  Beneath this is a rugged anthracite-colored area, in which a stainless steel underbody protection panel has been designed, like at the front end.  The boot lid opens and closes electrically, revealing a load space that can hold up to 1,101 liters of luggage (or 537 liters with all seats upright).

As well showcasing the future for Volkswagen design, the CrossBlue Coupe also highlights future drivetrain possibilities, in this case a plug-in hybrid system consisting of a V6 turbocharged direct injection gasoline engine and two electric motors (40 kW front and 85 kW rear), together producing up to 415 HP (305 kW).  Via a six-speed DSG gearbox, zero to 62 mph takes a mere 5.9 seconds, and the top speed is 146 mph.  Even with this level of performance, fuel economy is impressive with a combined cycle figure of 3.0 l/100 km, or 94.1 mpg.  In hybrid mode, with a depleted battery powered by the TSI engine, the CrossBlue Coupe returns 6.9 l/100 km (40.9 mpg).  This efficiency gives the CrossBlue Coupe, with its 80-litre fuel tank, a theoretical range of 1,190 km (740 miles).

The CrossBlue Coupe is based on Volkswagen’s new Modular Transverse Matrix (MQB) components set.  This would give any production version a large amount of flexibility when it comes to potential power: conventional drive systems with four- or six-cylinder engines could also be used, configured for a variety of fuels (gasoline, diesel, CNG).

Powered by its battery alone, the CrossBlue can cover up to 33 km/20 miles as an EV.
In E-mode, only the rear electric motor propels the vehicle and the TSI engine is shut off and decoupled.  At up to 75 mph, the engine is not engaged as long as the battery has sufficient charge.  As soon as there is a need for TSI power, it is coupled to the drivetrain again, within fractions of a second.  The battery can be charged by external power sources or by the engine while the vehicle is moving.

The driver can switch to a charging mode by pressing a button on the centre console.
The TSI engine charges the battery while driving to store enough electrical energy for EV operation later in the journey, for instance in an urban area.

There are also a number of other modes:

– Coasting: When the driver releases the accelerator pedal, the engine and electric motors are decoupled from the drivetrain, provided there is sufficient battery charge.
– Battery regeneration: When the accelerator is released or the brakes applied, the electric motors act as generators and feed energy recovered from the brakes into the battery.  In this case, the TSI is also shut off and decoupled from the drivetrain.
– Boosting: When more performance is required, the electric motors form an alliance with the TSI engine known as ‘boosting’.  In this mode, all four wheels are driven.
– Off-road (‘propshaft by wire’): All four wheels are driven.  In this case the front electric motor (supplied with energy by the TSI engine) operates as a generator and a power source for the electric motor at the rear.
– TSI only: In this mode, the CrossBlue Coupe is a pure front-wheel-drive vehicle.