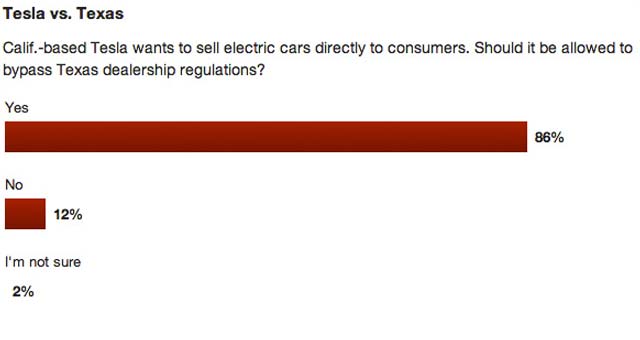 “This survey confirms that Texans, who take pride in their free enterprise philosophy, do not believe that there should be an arbitrary exception in the automotive marketplace. For the Auto Dealer Association to claim that restricting competition is in the best interests of the public is wrong and defies obvious common sense,” said Elon Musk, co-founder and CEO of Tesla Motors. “We hope that legislators will consider the overwhelming support shown in this poll and vote yes on House Bill 3351/Senate Bill 1659, which would allow manufacturers of electric cars to sell directly to consumers in Texas. This amendment takes care to ensure that the long held franchise rights of auto dealers to sell their existing brands are still protected, which was the original intention of the law.”

Auto dealers that sell gasoline cars have a fundamental conflict of interest relative to selling the virtues of an electric car. It is hard for them to sell electric cars without counter-selling the mainstay of their business. The ability to sell direct to consumers is therefore important for the adoption of sustainable transportation and is the best chance that a new electric car company has of succeeding.

Following passage of this bill, Tesla is committed to create several hundred new jobs in Texas at its stores and service centers. Texas would also be a leading candidate for the location of a future Tesla auto manufacturing plant.

Poll is still ongoing at Austin Business Journal and results may vary from what’s posted above.