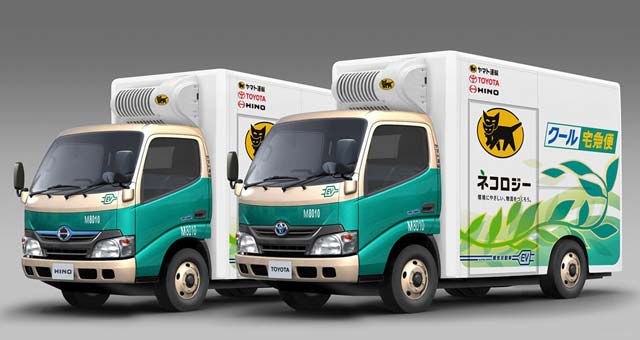 The small electric truck was created in line with specifications developed jointly by Yamato, Toyota, and Hino to provide “Cool TA-Q-BIN”, one of Yamato’s unique delivery services for goods at low or freezing temperatures. The small electric truck, including its refrigerator/freezer, is powered entirely by battery, meaning it generates no emissions during operation and is extremely quiet, making it ideal for delivery services in residential neighborhoods late at night and early in the morning.

The trials are scheduled to be conducted for about one year.  The three partners will verify the suitability and practicality of using the small electric trucks in delivery operations, and the results will be used to make improvements for the commercial launch of electric trucks.[wzslider height=”400″ lightbox=”true”]At the 42nd Tokyo Motor Show 2011, Hino displayed an EV truck concept vehicle with an ultra-low bed based on this idea and subsequently continued development, completing a practical-use prototype vehicle.  By placing a compact electric motor under the cab and adopting front-wheel drive, the batteries could be placed under the bed.  The bed floor could then be positioned at a height of just 440 mm above the ground, creating a vehicle with a much lower bed than conventional trucks.

After determining that Yamato’s initiatives for raising operating efficiency were in agreement with Toyota’s and Hino’s approaches to electric commercial vehicles, the three companies agreed to cooperate by conducting the trials.