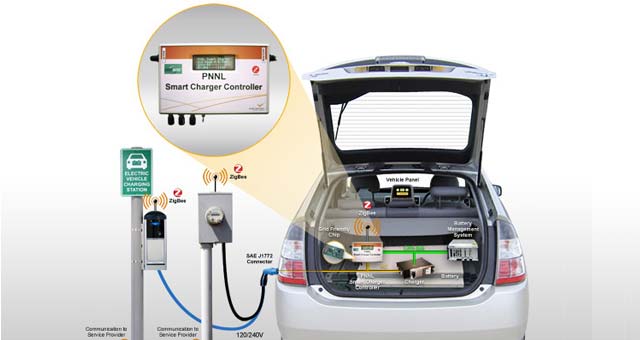 The PNNL technology tells a vehicle’s battery charger when to start and stop charging based upon existing conditions on the electrical grid. AeroVironment will use a portion of the licensed technology in a new prototype version of its Level II charging systems.

Additionally, in the event of a rapid drop in grid frequency, the charging system stops charging, providing a grid “shock absorber.” Such rapid frequency drops, while small in overall magnitude, indicate that a fault condition has occurred somewhere on the grid and that there is an imbalance between load and electricity generation. By reducing load the system can be rebalanced.

AeroVironment and PNNL share the vision that with millions of plug-in vehicles charging at any given time, modulating the aggregate charging rate of plug-in electric vehicles can help control grid frequency and support the integration of variable renewable generation sources, such as wind and solar.

Prototypes of the new AeroVironment charging system are available immediately for beta testing. The prototypes include Bluetooth wireless connectivity for data streaming and local control functions.