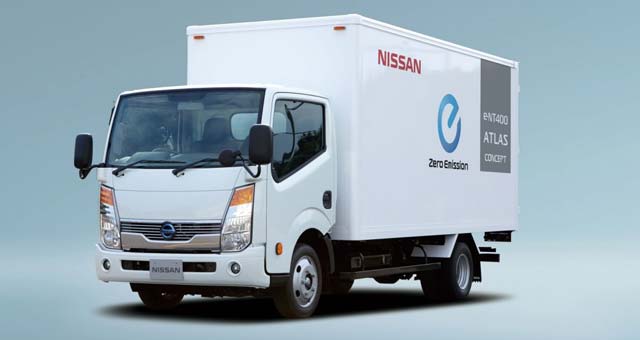 This system places no burden on the car engine, so improvements in fuel efficiency are expected. In addition, the output of the refrigeration equipment is not influenced by the number of revolutions of the car engine. This makes it easy to manage the temperature of the refrigerator and chiller compartments, and contributes to improvements in quality management for the products to be delivered.

Even when the engine is switched off during delivery, there is sufficient battery capacity to ensure stable operation of the refrigerator and chiller compartments for long periods.

The standard model of the ATLAS F24 Refrigerator Truck by Li-ion Battery is scheduled to go on sale in Japan in summer 2013.

Nissan is working to develop and sell commercial electric vehicles, in addition to passenger EVs, such as the Nissan LEAF. Nissan currently is preparing to launch the e-NV200 EV in 2014, a vehicle that is based on the light commercial van, NV200.

In order to extend the value of EV technology to the truck sector, Nissan is developing various trucks that make use of Nissan LEAF battery components. Beginning with the ATLAS F24 Refrigerator Truck by Li-ion Battery, the company plans to introduce models such as the 100% electric truck, e-NT400 ATLAS, and the ATLAS F24 Power Supply Truck in the near future.