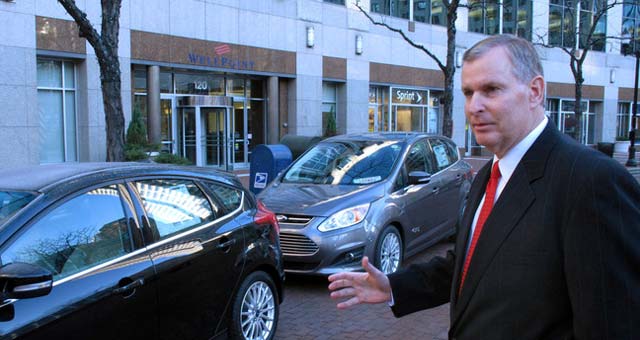 Indianapolis is aiming to become the first major U.S. city to replace its entire fleet with electric and plug-in hybrid vehicles, in a move aimed at reducing the nation’s reliance on foreign oil.

<blockquote><p>“The United States’ current transportation energy model, driven by oil, exacts an enormous cost financially and in terms of strategic leverage,” said Mayor Ballard. “Our oil dependence in some cases places the fruits of our labor into the hands of dictators united against the people of the United States.”</p></blockquote>

New vehicles would be purchased as older ones are retired, and the city hopes to completely swap out its current 3,100-vehicle fleet by 2025.

The city estimates that the move will save taxpayers $12,000 per car over its 10-year life span.

The city also will work with the private sector to phase in snow plows, fire trucks and other heavy vehicles that run on compressed natural gas, and will ask automakers to develop a plug-in hybrid police car. Currently, the city’s police cars achieve a paltry 10 miles per gallon. A 40 mile per gallon police plug-in hybrid could save the city an estimated $10 million per year.

Indianapolis, the 12th largest city in the United States, has 200 charging station and is working with the private sector to increase that number.