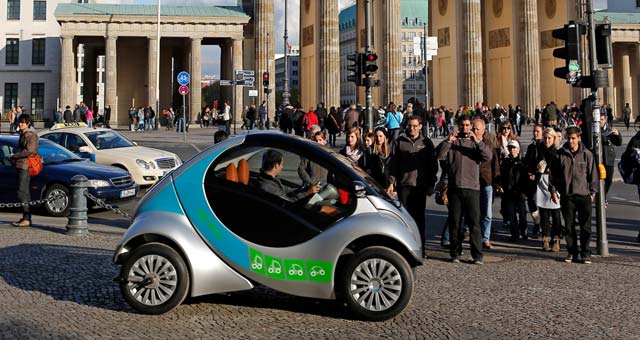 Deutsche Bahn, the international mobility supplier and also the company that operates the German railway network, has chosen the Hiriko electric vehicle –promoted by a Basque corporate consortium- to complete its transport network in Berlin.

Both entities have reached a collaboration agreement this morning in the German capital to initiate a pilot project with which to progressively incorporate the Basque vehicle into the car sharing network with which Deutche Bahn completes its railway services.

The agreement, that includes a joint development of the Hiriko project in Germany,, includes an initial phase in 2013 in which the Hiriko Fold folding is to be tested and adapted for public use in Berlin through the electroMobility platform of the InnoZ Innovation Centre.

Once all of the technical approvals have been obtained, it is planned to integrate Hiriko into Deutsche Bahn’s electric car sharing system –denominated eFlinkster. In practice, these Basque vehicles will circulate through the urban landscape of Berlin in test mode in 2013 and finally in an official manner in 2014.

One of Deutsche Bahn’s main partners in the development of innovating urban mobility proposals is the InnoZ electric mobility research centre, with which Hiriko has been collaborating for over two years. As a result of this collaboration, on 27th May 2010 the first Hiriko prototype was unveiled in Berlin together with the Massachusetts Institute of Technology (MIT).

Since 2010, the Basque consortium has also been collaborating with the Berlin authorities, who have appreciated in Hiriko an attractive opportunity to respond to the city’s intelligent mobility needs. In this context, this morning’s meeting is a solid step forward in that it reaffirms Deutsche Bahn’s and Berlín’s commitment with the Basque electric vehicle.

Hiriko stands a mere 2.5 meters long, or 20 centimeters shorter than a smart fortwo. However, the sliding rear axle allows the car to ”fold” to just 1.5 meter. That means you could fit three Hiriko EVs into a single regular parking spot.

With a top speed of 37 mph (60 km/h) and an electric range of 75 miles (120 km), the Hiriko’s battery charges up in just 15 minutes. The wheels can rotate 360 degrees, and each one has its own electric motor, a feature that will continue in later versions of the car, which will include a small pickup truck and convertible passenger car.

The production version of the Hiriko EV will be revealed at the 2013 Geneva Motor Show.

Dec 23, 2012Blagojce Krivevski
Does An Electric Cars Need To Be Covered And Protected More Than A Regular Vehicle?State Plugs-in to Electric Vehicles & Charging Stations