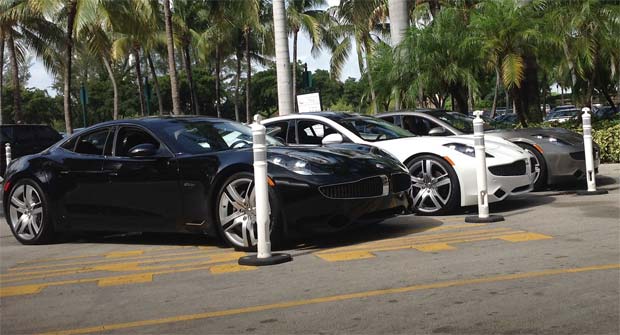 Fisker Automotive lost more than $30 million worth of luxury cars when a shipment of Karma plug-in hybrids was flooded during Superstorm Sandy last week.

More than 300 Karma plug-in hybrids, which each start around $100,000, were destroyed at a New Jersey’s Port Newark shipping docks during the storm, Fisker spokesman Roger Ormisher said on Tuesday.

The cars were insured and Fisker expects “no impact from a business or a financial point of view,” he said, adding that Fisker does not expect any problems with meeting U.S. demand.

After a thorough inspection witnessed by NHTSA representatives, Fisker engineers determined that the damage to the Karmas was the result of the cars being submerged under five to eight feet of seawater for several hours that left corrosive salt in a low‑voltage Vehicle Control Unit in one Karma.

The Vehicle Control Unit is a standard component found in many types of vehicles and is powered by a typical 12V car battery. This residual salt damage caused a short circuit, which led to a fire that heavy winds then spread to other Karmas parked nearby. There were no explosions as had been inaccurately reported.

The company ruled out the cars’ 20-kilowatt-hour lithium-ion battery packs as a cause of, or even a contributing factor to, the blaze.

The 300 Karma plug-in hybrids were among the more than 10,000 vehicles damaged during the storm at Port Newark.