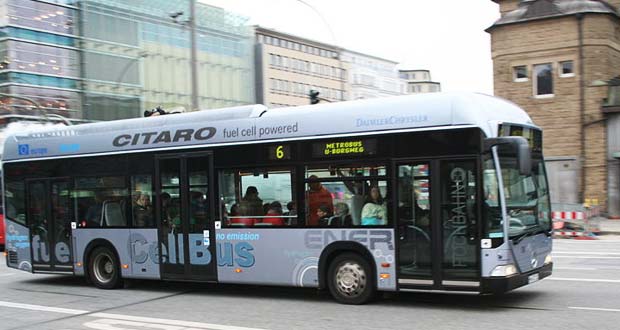 The EBUS Award is being offered for the first time, and is intended to publicise externally qualitative and innovative solutions in the field of electric buses.

The fit-for-the-future drive concept in the Citaro FuelCELL Hybrid, which comprises the fuel cell, lithium-ion battery and electric motor, enabling the Mercedes-Benz city bus to travel over 300 kilometers (186 miles) without producing any emissions whatsoever, demonstrates that it is a worthy winner of the award.

The judges particularly welcomed the use of a fuel cell that had already been deployed in the passenger car segment. Additionally, they said that the 17 Citaro FuelCELL Hybrid units already built emphasised the seriousness with which the development has been driven forward by Daimler Buses.

The FuelCELL concept in the Citaro

Thanks to improved fuel cell components (the fuel cell stacks are now identical to those in the Mercedes-Benz B-Class FCELL with fuel cell drive) and the hybridisation with lithium-ion batteries (27 kW/h), the new Citaro FuelCELL Hybrid delivers a 50-percent saving in hydrogen compared with the predecessor generation. As a result, it has been possible to reduce the number of tanks from the total of nine on board the fuel-cell buses deployed in earlier trials to seven, holding 35 kg of hydrogen in all. With the new FuelCELL Hybrid drive system, the fuel cell, as the electricity supplier, is intelligently linked to several components: to the battery, to the electric wheel hub drive and also to the integrated regenerative braking system. An internal combustion engine is now completely superfluous. The range of the fuel cell bus is over 300 kilometers (186 miles), and the refuelling time is just eight to ten minutes. This means that the Citaro FuelCELL Hybrid can be deployed just as simply and flexibly as today’s diesel vehicles. What is more, the drive system and fuel cell are virtually maintenance-free and very long-lasting. With these diverse technical advances, buses running on electric power alone with fuel cells as energy generators are now a major step closer to production maturity.