Nissan LEAF to be Used by Portuguese Police 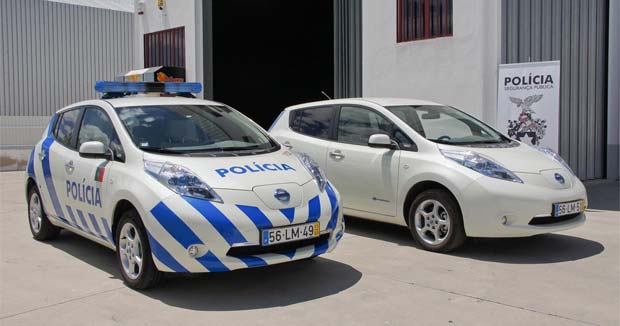 The Portuguese police have decided to use the Nissan LEAF as a squad car for the country’s police force.

The eight Nissan LEAF police cars will be operated by Portugal’s PSP (Polícia de Segurança Pública) the security force responsible for policing the large urban areas of the country.

The LEAF police cars will be used mainly as part of the PSP’s Safe School Program, but with flashing blue lights, sirens and clear ‘Polícia’ markings, they can be called upon to perform other police duties at any time.

Nissan LEAF was chosen by PSP as part of its push to reduce its ecological footprint. “We pride ourselves in being the first police force in the world to incorporate cars with zero-emission technology as part of our 5,000 vehicle fleet,” said Superintendent Paul Gomes Valente, National Director of PSP.

“We want to continue reducing pollution in large urban centres and the introduction of the 100 per cent electric Nissan LEAF sets a new benchmark for our fleet,” he added.

Portugal is an EV pioneer in Europe. It was one of the first countries to install a network of EV chargers in its big cities and was the first to sell Nissan LEAF to the European public when it was introduced in 2011.[wzslider height=”400″ lightbox=”true”]