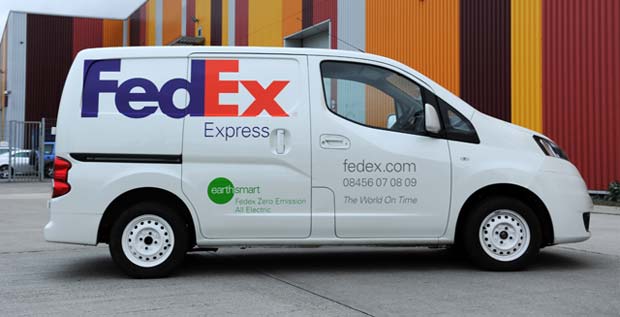 Nissan in cooperation with FedEx Express will carry out real-world driving tests of the e-NV200 electric van in the Yokohama area beginning in mid-July.

Nissan will provide FedEx Express with a test model e-NV200 to use as a delivery vehicle for approximately one month. Nissan will then evaluate the vehicle’s potential for the delivery of international air cargo. This will be the second test conducted with FedEx, following a similar trial in Europe during last winter.

Nissan is running a global proving test with large commercial fleets to find out how the e-NV200 performs under real operating conditions. It has already undergone trials with the Japan Post Service and AEON Retail Co., Ltd. in Japan, and FedEx and British Gas in Europe.

The Nissan e-NV200 shares its major drivetrain components with the innovative Nissan LEAF. Silent, zero emission power is supplied by a lithium-ion battery composed of 48 compact modules and a high-response 80kW AC synchronous motor that generates 280Nm of torque. Unlike a conventional internal combustion engine, the motor delivers 100% of its torque from start with immediate response bringing excellent acceleration and smooth, comfortable driving feel.

This will deliver a driving range similar to the Nissan LEAF on a single charge and similar performance, together with best in class running and maintenance costs.

Earlier this year, Nissan said that the e-NV200 electric van will go into production at its Barcelona plant in the 2013 Financial Year.

The e-NV200 will be based on the existing award-winning NV200 currently produced at the plant and will be an important and innovative addition to Nissan’s global range of light commercial vehicles (LCV’s).

The Nissan NV200 is a new-generation compact commercial vehicle suited to a wide variety of driving situations for customers around the world, including businesses, daily use, or leisure. It was chosen as the base vehicle for New York’s Taxi of Tomorrow—the exclusive taxi of New York City.

The NV200 first became available in Japan and Europe in 2009 and is now available in many other countries, including China and Malaysia. Future launches are planned for the U.S. and India. Nissan now sells the NV200 in approximately 40 countries throughout the world. It has received positive feedback from customers for its spacious interior, competitive fuel economy, excellent driving performance, and attractive design.