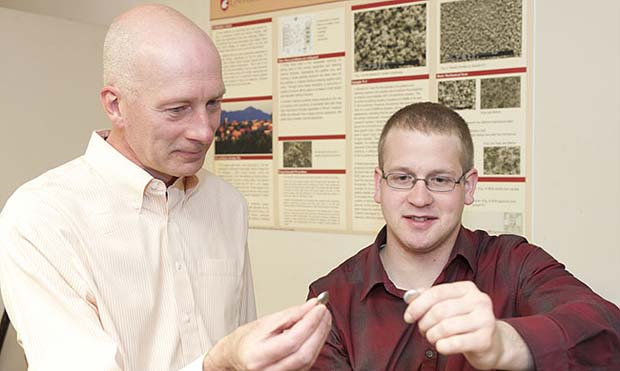 Washington State University researchers have developed a new technology that could triple the capacity of lithium-ion batteries commonly used in electric cars and consumer electronics.

Led by Grant Norton, professor in the School of Mechanical and Materials Engineering, the researchers have filed patents on the nanoscale-based technology, which also allows the batteries to re-charge many more times and more quickly than current models. They expect to bring it to the market within a year.

A rechargeable lithium-ion battery is composed of two electrodes – the cathode and the anode – which are separated by an electrolyte. Lithium ions move from the cathode during charging, and are stored as energy by the anode. The reverse occurs during discharging to create an electric current.

Current lithium-ion batteries typically have anodes made from graphite, which only has about a third of the energy-storing capacity of tin. But the tin anodes suffer from whisker growth, which can short-circuit a battery.

The new tin anode has the potential to store almost three times the energy of graphite.

Norton and postdoctoral researcher Uttara Sahaym developed the novel material a little over a year ago while working on a project to mitigate tin whiskers, which are literally tiny whiskers that grow on tin-plated electronics. The whiskers, which can sometimes grow as long as 10 millimeters, are a pesky problem in microelectronics because they create short circuits that can cause catastrophic damage. Yet, despite the fact that tin whiskers have been causing problems for more than 60 years, researchers have been unable to come up with ways to entirely avoid them.

Norton and his group decided to turn the problem on its head and see if they could control the growth of tin whiskers, instead of trying to get rid of them. They applied the work to developing a tin-based anode for batteries.

The researchers developed a method for growing tin nanoneedles directly onto copper foil using a standard electroplating process that is commonly used in industry. Electroplating means the tin-based anode costs less than regular graphite anodes with triple the energy storage capacity. The end product battery will look exactly the same as the current batteries, so that manufacturers don’t have to redesign their electronic devices to make room for a new battery.

With support from the WSU College of Engineering and Architecture’s Emerging Technology Fund, which is funded by private donations, the researchers have started building and testing the batteries.