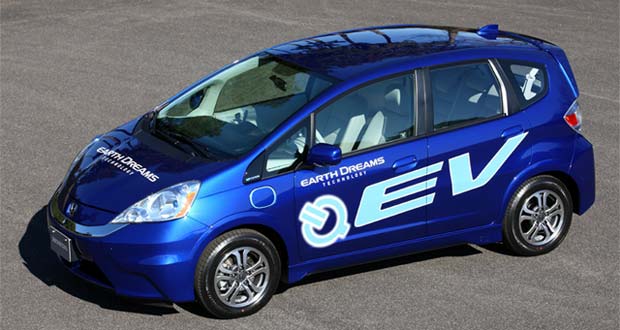 The 2013 Honda Fit EV has been certified by the Environmental Protection Agency to offer 118MPGe (mile-per-gallon equivalency) combined, with the 132 MPGe city and 105 MPGe on the highway, the highest rating of any electric passenger car to date.

With a low consumption rating of just 29 kilowatt hours (kWh) per 100 miles and low EPA rated annual fuel cost of $500, the 2013 Honda Fit EV can help consumers get more miles for each charging dollar.

Using a 20-kilowatt-hour lithium-ion battery, the 2013 Fit EV gets a total range of 82-mile in the combined driving cycle.

The Fit EV’s 92 kilowatt (123 horsepower) coaxial electric motor generates 189 ft-lb of torque, and is teamed to a chassis with a fully-independent suspension and a driver-selectable 3-mode electric drive system adapted from the CR-Z Sport Hybrid. The Fit EV battery can be recharged in less than 3 hours from a low charge indicator illumination point when connected to a 240-volt circuit.

Honda debuted the 2013 Fit EV at the 2011 Los Angeles Auto Show and announced plans to begin leasing the battery-electric commuter vehicle to 1,100 customers in select California and Oregon markets during the summer of 2012, followed by an East Coast rollout in 2013.