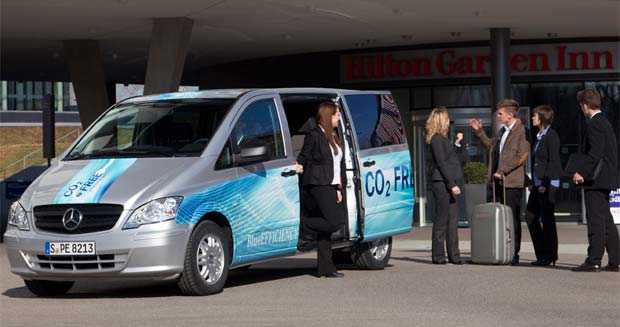 With its range of around 130 km (81 miles), the Vito E-Cell crewbus is optimized for deployment on short routes involving numerous stops.

The nominal voltage stands at 360 V, with a capacity of 36 kWh. The speed is electronically limited to 89 km/h (55 mph) in the interests of a range of 130 km (New European Driving Cycle, NEDC).

The Vito E-CELL crewbus is well able to hold its own in city traffic with the available battery power. Acceleration from 0 to 50/80 km/h in 6.5/11 seconds ensures that it is a swift mover at all times.

The Vito E-CELL’s batteries are charged from the 380/400 V grid in a maximum of five hours. Charging from the 230 V grid is subsequently possible as necessary. The battery additionally stores recuperated power while the vehicle is in motion.

The Vito E-CELL does not compromise on safety: ESP and driver’s airbag come as standard and a safety belt is integrated in each seat. The batteries are protected by a crash element. In the event of airbag activation, the high-voltage technology will be shut down automatically. The Vito E-CELL has demonstrated its high safety standard in an impressive manner in crash tests.

After its first year in service with customers, the Vito E-CELL has proven its credentials as an ideal vehicle for urban traffic. In all, 230 Vito E-CELL vans are now on the road as part of the promotion schemes currently in operation in Germany. Together, they have so far successfully covered around 650,000 km.

The Mercedes-Benz Vito E-CELL has won a host of awards from independent juries. Among its titles is “Green Commercial of the Year”. In 2011 the Vito E-CELL won the “Alternative Drives” innovation award in the “KEP-Transporter des Jahres” competition for courier, express and parcel delivery vans, the “Umwelttechnikpreis Baden-Württemberg” for environmental engineering and technology and the Design Award at the Michelin “Challenge Bibendum”, one of the largest forums worldwide on sustainable mobility.

For the first time ever, the transparent model of the Mercedes-Benz Vito E-CELL provides a vivid demonstration of how electric mobility works. Mercedes-Benz is offering clear insights in Geneva into the Vito E-CELL’s mode of functioning: from chargers through voltage transformers, high-voltage control units and the battery to the electric motor.

The model employs high-performance LEDs to visualise the flow of current from the battery via the control electronics to the drive shafts.