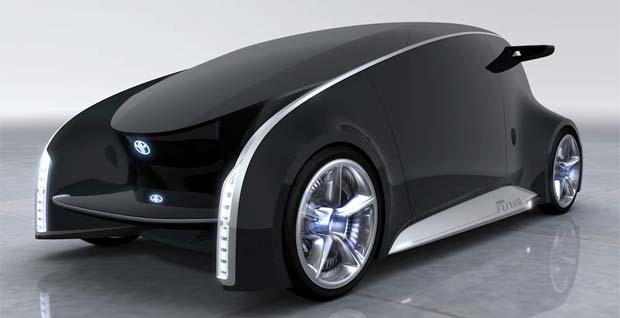 This is the Toyota Fun-Vii, a “smartphone on wheels” concept car that has a number of features allowing users to customize the car’s appearance and connect to the web while driving.

The Fun-Vii, which stands for ‘vehicle interactive internet’, is a concept car with a bodyshell made of touch-screen panels that not only allow the driver to change the pattern on display but also connect the car to the dealership’s website for a check-up.

The ultimate in personalization functions offer the ability to alter the content displayed on the interior and exterior of the Fun-Vii with the same ease as downloading an application. For instance, the whole vehicle body can be used as a display space, with the body color and display content changeable at will. This allows the entire vehicle to function as a terminal for displaying messages or other information.

The whole of the vehicle interior also can function as a display space, with the interior freely adjustable to match the mood of the moment. Content such as navigation information is blended seamlessly into the interior through the use of augmented reality.  Furthermore, the vehicle’s “navigation concierge” can provide the passengers with driving information and guidance through a vocal interface.

A network update function makes sure the software versions for the vehicle’s drive, control and multimedia system are always up-to-date.

The Fun-Vii is able to link with surrounding vehicles and infrastructure, allowing it to detect other potentially hazardous vehicles—such as vehicles in blind spots—in advance, or to connect with friends who are driving nearby.

Operation of the Fun-Vii is not limited to inside the vehicle itself, with a portion of the vehicle’s functions access able remotely via a smartphone or other mobile communication device.

Two other electric Toyota concept cars have also been revealed ahead of their debut at Tokyo Motor Show.

The FT-EV III is a four-seater electric vehicle based on the Toyota iQ.

Equipped with a lithium-ion battery, it achieves an estimated cruising range of 65 miles on a fully charged battery.

This concept model represents the next step towards the commercial launch of a Toyota fuel cell vehicle by 2015.

This should be able to reach 430 miles on one charge.[wzslider height=”400″ lightbox=”true”]