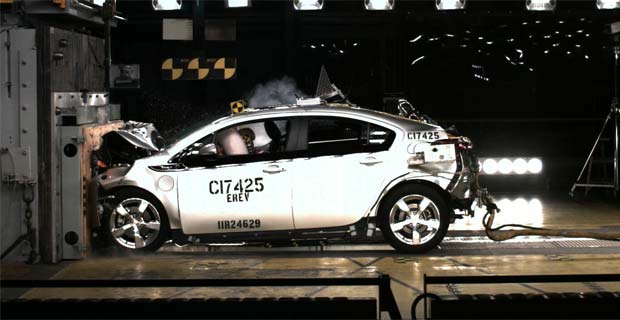 The NHTSA replicated side impact tests on three Volts on Nov. 16, 17 and 18. The tests were similar to one NHTSA conducted last May. In that incident, the Volt’s batteries caught fire three weeks after the crash test. No one had drained the battery pack after the crash test.

Of last week’s tests, the first on Nov. 16 did not result in a fire. But a battery test on Nov. 17 initially experienced a temporary temperature increase, and a week later the battery pack caught fire. Another battery tested on Nov. 18, which was rotated 180 degrees within hours after the test, began to smoke and emit sparks shortly after the rotation.

After the first battery fire, GM officials complained that NHTSA did not drain the battery of energy as called for under the automaker’s crash procedures. NHTSA normally drains fuel from gasoline-powered cars after crash tests, they said.

So far, no fires have been reported in Volts involved in roadway crashes, NHTSA said. More than 5,000 of the vehicles have been sold this year through October.

NHTSA said on Friday it believes that electric vehicles have incredible potential to save people money at the pump, help protect the environment, create jobs and strengthen national security by reducing dependence on oil.

Nevertheless, it is working with manufacturers to ensure they have appropriate post-crash protocols and to help inform emergency services of the potential for post-crash fires in electric vehicles.