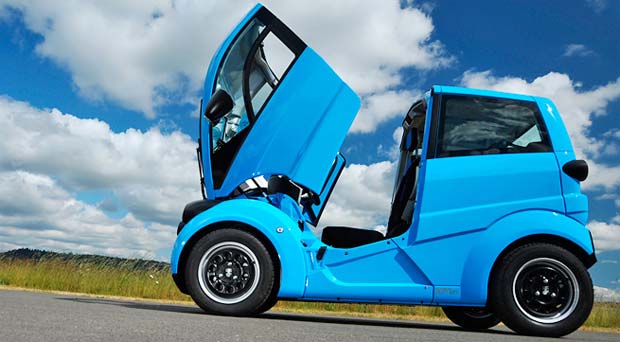 According to Gordon Murray Designs, the T.27 is 36 percent more efficient than the Mitsubishi i-MiEV and 29 percent more than the Smart car thanks to the car’s lightweight structure.

The design and development program for T.27 is a £9 million project, made possible through a £4.5 million investment from the government-backed Technology Strategy Board.  From a clean sheet of paper to a running prototype the program has taken just 17 months including the design and build of a completely new electric powertrain by Zytek Automotive Ltd, one of the Consortium partners.

The 2.5 meters long T.27 can carry three adult passengers. The weight of the car is 680kg including the battery.

Despite the relative small size of the powertrain, the car is capable of reaching 62mph in less than 15 seconds and has a top speed of around 60mph. Driving range is estimated at 100 miles over the New European Drive Cycle (limited to 100km/h) and 130 miles on the European Drive Cycle (ECE15).

The lightweight iFrame geometry in the T.27 allowed every aspect of the vehicle to be optimized including Zytek Automotive’s integrated powertrain.

The total weight of the motor, inverter and gearbox is less than 50 kg (110 lbs), approximately 45% of that of a comparative, current production, water-cooled drivetrain with its associated radiator, cooling fluid, pumps etc. This light weight contributes to the low overall vehicle weight while the highly compact size means that luggage space can be increased compared to the regular internal combustion engined vehicle.

With low vehicle weight being a primary project target, every effort was taken to design and integrate the battery into the vehicle, and as such a single structure has been used, improving on the more traditional “box within a box” approach, Zytek said. This yielded a total battery weight of 129 kg (284 lbs).

The T.27 is an electric version of the gasoline-powered T.25 and will make its public road debut at the RAC Future Car Challenge on November 5, 2011.[wzslider height=”400″ lightbox=”true”]