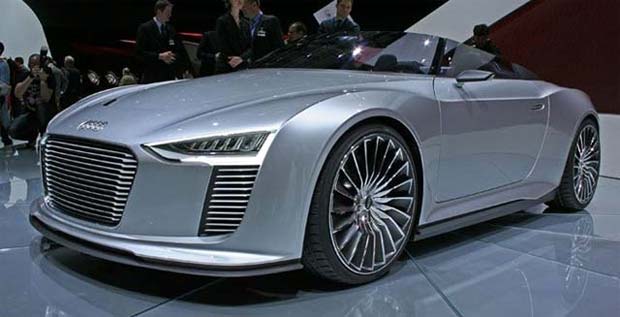 Audi is demonstrating the Audi e-tron Spyder electric concept car at “Le Mans vers le Futur” (Le Mans toward the future), a support event for the 79th running of the 24 Hours of Le Mans, which takes place June 11-12.

Backed by the power of three propulsion units, the Audi e-tron Spyder is fit for the racetrack. Two asynchronous electric motors drive the front wheels with a combined 64 kW (87 hp) of power and 352 Nm (259.62 lb-ft) of torque. In front of the rear axle sits a twin-turbocharged 3.0 TDI, mounted longitudinally in the direction of travel. It pumps out up to 221 kW (300 hp) of power and 650 Nm (479.42 lb-ft) of torque, which are funneled to the rear wheels via a seven-speed S tronic. The mighty V6, currently making its production debut in the A6 Avant, is a highly sophisticated powerplant, emitting a sonorous growl only when under load.

The three units can summon up their power separately or in unison. The maximum system output is 388 hp, with a maximum system torque of over 900 Nm (663.81 lb-ft). The lithium-ion battery, located in the front section of the car, stores up to 9.1 kWh of energy. With 400 volts of three-phase alternating current, the battery takes about one hour to charge up at an electrical outlet.

Under normal driving conditions, the drive management system sends 75 percent of the power to the rear wheels and the remaining 25 percent to the front wheels. As needed, the system selectively applies the brakes to slow the wheels individually or provides precise, millisecond-long surges of power to specific wheels in order to speed them up, allowing understeer and oversteer to be nipped in the bud. The electric motors on the front wheels can be activated individually, and a mechanical sport differential distributes the power at the rear. This high-precision torque vectoring system marks a new stage of evolution for the quattro drive – the e-tron quattro.

The Audi e-tron Spyder tips the scales at just 1,450 kilograms (3,197 lb); its low weight can be attributed primarily to the aluminum body constructed as per the Audi Space Frame (ASF) principle. The engine hood and numerous add-on parts are made of carbon fiber-reinforced polymer (CFRP). The axle load distribution is 50:50 – ideal for the dynamic concept.

The front suspension features a double-wishbone construction, with trapezoidal links made of forged aluminum at the rear. The setup is stiff, but offers adequate comfort. The rack-and-pinion steering has an electromechanical drive. The design study is fitted with 20-inch wheels; 245/30 tires up front and 265/30 tires at the rear ensure high lateral acceleration and powerful grip.

Standing just 1.11 meters (3.64 ft) tall, the showcar is 1.81 meters (5.94 ft) wide and has a wheelbase of 2.43 meters (7.97 ft). The progressive, delineated design makes it identifiable as an Audi at a mere glance. Its defining trait is the reduction to the essential – also true of the interior with its two lightweight bucket seats and the large, freely configurable display.

Along with the e-tron Spyder, Audi is sending an Audi Q5 hybrid quattro to Le Mans. The production SUV will go on sale before the end of 2011. Both cars will also be on display at the “Le Mans vers le futur” exhibit in the Racing Village next to the Audi Fan Area.

Honda and Nissan are also presenting their green racecars at the second annual Le Mans vers le Futur. Last week, Nissan announced that its all-electric LEAF NISMO RC will take place at the event, while Honda said it will show-off its CR-Z hybrid racecar.