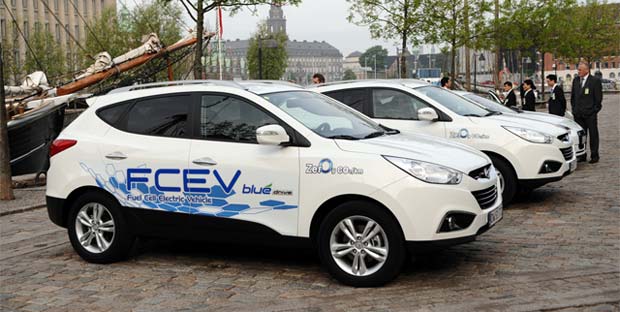 Hyundai provided two units of its latest ix35 FCEV for the test drive, which was held at the City Hall of Copenhagen, Denmark, on May 12. The test drive was attended by mayors of the capital cities of Norway, Sweden, Denmark and Iceland. After the event, H2 Logic A/S, a leading developer of hydrogen & fuel cell technology in Denmark, and the City of Copenhagen, plan to operate test drives of the vehicles at selected public events in Northern European cities.

The test drive demonstrated Hyundai’s advanced eco-friendly technology and provided further momentum to its leading role in the European FCEV market. Before the test drive, the hydrogen-powered SUV traveled 340 km on a single refueling, the first for an electric car, from the city of Holstebro in West Denmark to Copenhagen in the East.

The ix35 FCEV, which emits only water vapor, boasts the same convenience as today’s vehicles powered by traditional internal combustion engines by offering a driving range comparable to gasoline on a single refueling, as well as a maximum speed of 160 km/h and zero-to-100km/h time of 12.8 seconds.

Prior to the test drive, Hyundai Motor Group signed a memorandum of understanding (MOU) with the City of Copenhagen, H2 Logic and Hydrogen Link, an association working to advance the use of electricity for transportation, based on hydrogen and fuel cells in Denmark. The agreement aims to cooperate on establishing the related infrastructure for FCEVs and on supplying vehicles.

This January, Hyundai signed an MOU with four Northern European countries to operate a test fleet of FCEVs. In February, it signed an MOU with the Clean Energy Partnership (CEP) in Germany to help promote FCEVs and showcase the company’s competitiveness in eco-friendly vehicles.[wzslider height=”400″ lightbox=”true”]