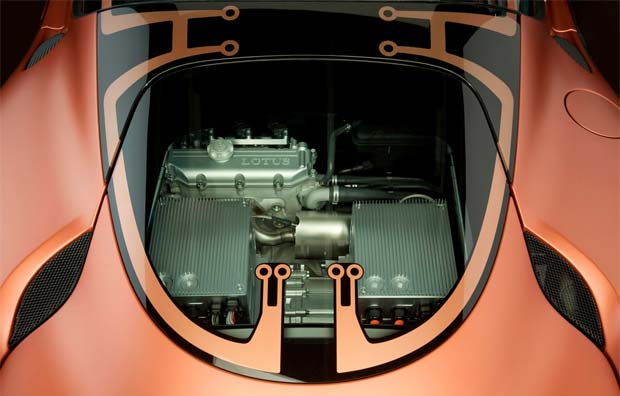 Lotus will unveil the The Evora 414E Hybrid, a plug-in hybrid concept version of its Evora model, at the upcoming Geneva Motor Show.

The Evora 414E Hybrid is so named because it offers 414PS (306kW, 408hp) of power. Lotus Engineering developed a drivetrain system consisting of two electric motors — one delivering 204 horsepower and 295 pound-feet of torque to each rear wheel, resulting in a 0-60 time in less than 4 seconds and range over 300 miles.

To improve the driving sensation, the concept also includes a sport mode that simulates a seven-speed transmission.

Electrical power is stored in a lithium polymer battery pack optimized for energy density, efficiency and high power demand, mounted in the centre of the vehicle for stability and safety. Additional range is provided by the Lotus Range Extender engine, an optimized 47-horsepower, 1.2 liter, three-cylinder engine, designed specifically for series hybrid vehicles. The drivetrain is designed to combine astonishing performance with efficient, low emissions driving.

The Evora 414E can travel 35 miles on battery power alone. After that point, the engine becomes a generator, supplying the motors with electricity and topping off the lithium polymer battery pack that sits in the middle of the chassis. Charging is an overnight affair, and the socket hides under the rear license plate.

The Evora 414E also features Lotus’ HALOsonic Internal and External Electronic Sound Synthesis, a system designed to improve pedestrian safety outside the vehicle through an external sound system. In addition to proving an audible warning to those outside the car, the system also simulates four engine sounds for the driver, including a V6, V12 and a futuristic propulsion sound.